Menfreya in the Morning by Victoria Holt 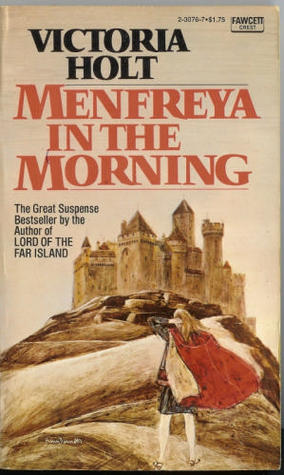 The best question to ask yourself before picking up this novel is: "Did I enjoy Daphne du Maurier's REBECCA?" MENFREYA is REBECCA redux; a romance about a young, insecure woman who doesn't feel as if she deserves the man who whisks her away to the magnificent house of her dreams - and also a mystery, involving death, murder, secrets, and an insidious other woman.

Honestly, it's magnificent how so many of Victoria Holt's (or Jean Plaidy's or Philippa Carr's - they're all the same novels) are good, considering how quickly she churned them out. Granted, there are some rather glaring misses on her repertoire, but the bijous outweigh the blights. I keep coming back to her again and again, which says something because quite often there's no sex, and often no romance even until the very end. I come for the atmosphere, and the layers of mystery and strange events, with the Eyresque heroine at the focal point of it all, steadfastly navigating through the oddities & terrors.

Harriet Delvaney is an interesting and sympathetic character because unlike so many other gothic heroines, she isn't beautiful; she's plain with good but unremarkable features, and a limp. Her father resents her, since her mother died in childbirth, and at one point she actually attempts to run away...to Menfreya, where she's friends with the Menfreys, especially their children Bevil and Gwennan. (Those names, though - omg.) The Menfrey's are everything she wishes she was: beautiful, mysterious, with a rich, epic family history that is both dark and romantic and doomed.

As Harriet grows older, she becomes clever, sarcastic, and bitter. She's in love with Bevil, but his ease with women makes her heartbroken and insecure. Various people around her die in unpleasant ways, diminishing the already small circle of people who care about her at all. She gets more and more involved with the Menfreys, and her fascination with them continues even when they tumble off their respective pedestals to reveal the flaws in their seeming perfection. And even when she does finally marry, it isn't what she expects: her marriage is plagued with insecurities and suspicions that her husband only married her for her fortune, that he's seeing other women on the side, and, toward the end, that someone might actually be trying to murder her to steal her husband!

MENFREYA is probably one of my favorite Holt novels to date. There's a lot of emotion in this book, and passion too. Harriet is a great heroine, who is selfish but also smart, and whose insecurities actually feel relatable. Bevil is a more typical gothic hero, in the sense that you're never 100% sure whether he's hero or villain until the end. The difference, I think, is that Bevil's sinister attributes were more realistic, like his cold anger and tendency towards mockery (and there's a rape/forced seduction scene in here, that's of the blink-and-you'll-miss-it variety). The atmosphere of this book, which is set in Cornwall, is so gloomy and dramatic, but romantic and a little fanciful. Honestly, it's like you took Dodie Smith's I CAPTURE THE CASTLE and du Maurier's REBECCA and mashed them up to glorious effect. A must-read - especially if you're a fan of Holt already, like me.

Here's a picture of the lovely hard cover I had with my fancy Pokemon card bookmark: