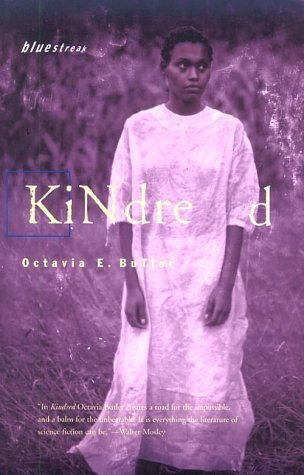 There are a lot of books that talk about the antebellum south, especially in romance novels where it is a popular setting, but few seem to capture the sheer unfairness of what it must have been like as a non-white person living in the South in the nineteenth century. I love Octavia Butler's science fiction, but KINDRED is a book that I purposely put off reading because I'd heard it was brutal. Good, but brutal, and utterly unflinching in the portrayal of that brutality.

Dana is a black woman living in the 1970s. Her husband, Kevin, is white, and both their families disapprove of that union, even in the twentieth century. Things are pretty good for Dana, though; she has a decent job, a husband who loves her, and her own house filled with books. All that changes when one day, without explanation, she's plunged into the past to save a white relative from death.

Rufus is the son of a plantation owner, and one of her relatives, the Weylins, although her family history is so occluded that until now, she never realized he was white. There's a bond connecting them, tightening whenever Rufus is about to die - and the only way that Dana is able to return to her own time is when her own life is threatened. Some people have said that this reminded them of OUTLANDER, and that's true: the time-travel is just as sketchy and mysterious, and neither shrink back from cruelty and rape.

What makes KINDRED such an interesting book is the complex way that Butler portrays slavery. She makes so much social commentary about both the twentieth century and the nineteenth century, and despite being published about forty years ago, it still feels fresh and modern. Dana struggles with slavery as a modern woman, and yet even she realizes how sinister a trap it is: when you have no rights, any concession feels like a blessing, to the point where you may start to feel affection for someone just treating you like a human being. She experiences something akin to Stockholm syndrome, and sees firsthand how some of her peers struggle and are oppressed by those same societal constraints.

KINDRED is not an easy read. There is rape, and torture, and cruelty of all colors. The N-word is bandied around a lot (because this is the South in the nineteenth century, and it would not be realistic otherwise). I think many readers, white readers especially, will probably be shocked at the no-holds barred approach, especially if they're accustomed to the version of history that sugar-coats the antebellum period and has slaves and black servants being adored and treated like family. Dana herself has a similar moment of disillusionment when she is researching the period and picks up a copy of GONE WITH THE WIND, only to put it down in disgust.

It's important to know that, so we remember why we must never go back; and why we must do our best going forward to work towards a future of true equality. We still have a ways to go.
Posted by Nenia at 8:19 PM