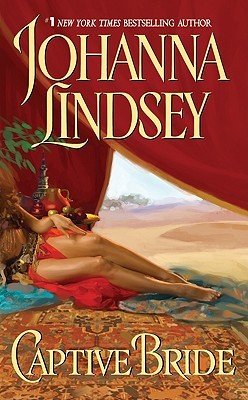 Real talk: that cover. Normally, I hate the rereleased versions of these old bodice rippers, but this is the first time I actually like the updated version more than the original. The vibrant colors, the detail on the woman's costume, the glimpse of desert beyond - it reminds me of the original cover on Victoria Holt's Gothic novel, CAPTIVE, which is a compliment, as that cover is gorgeous.

Now the book - oh God, this book. Have you ever read something so bad that it actually became good, because you just couldn't look away from the madness unfolding? That was CAPTIVE BRIDE for me. The story and characters are so unrealistic and ridiculous that it actually took on the surrealism of a soap opera, replete with bad acting & plots that come out of the blue. It was great.

Christina, our heroine, starts out the story by coming to London with her brother. Immediately, propositions start flooding in, but Christina is utterly uninterested in marriage. That goes for Philip Caxton, the gorgeous half-British half-Arab lord who decides he wants her, too. She spurns his proposal of marriage along with all the rest that plunges her into an "I must have her!" obsession.

Christina's brother, John, who is in the military, receives a summons to Cairo shortly afterwards (the "irresistible call of adventure" alluded to in the summary, I guess!), and Christina insists on coming with him. That night, she is abducted from her bed and finds herself in the camp of a sheikh - who is none other than Philip himself. (I guess he commutes.) He proceeds to give her the "now you are mine!" villain speech, followed by forced seduction, traitorous bodies, etc. It doesn't really take Christina long to decide that she loves him, although she hides her feelings because she knows that he doesn't intend to marry her and only wants her for her body, etc. They settle into a semblance of non-marital bliss, punctuated by the odd threat of beatings or Christina figuratively stamping her foot.

At one point, Christina is actually kidnapped and beaten before being brought to another Sheikh named Ali. He claims he wants revenge for his daughter, who he attempted to marry to Philip's father, Yasir. Yasir was so in love with his first wife that he treated Ali's daughter very badly, raping her the first night, only to never touch her again after that while neglecting their one son. Since Yasir dies before revenge can be implemented, Ali decides to target Philip instead. Philip comes to save Christina and engages in a fight to the death with the man who beat her, only to be strapped down and left to die under the hot, blazing son. He's rescued, of course, and then he and Christina go back to camp to nurse their wounds.

Shortly after this, one of Philip's men, Rashid, tells Christina that Philip wants to marry another woman in the camp and needs her to leave forever. Which is just so stupid, because Philip already caught Rashid betraying him before and let him off with a slap on the wrist - why wouldn't he kill someone who betrayed him, with his violent temperament? Or, failing that, why wouldn't he warn Christina about the traitor and say something like, "DO NOT TRUST HIM!" But Christina, being an idiot, takes Rashid's words at face value and goes back to her brother, who actually takes her capture in stride and is very sympathetic towards her.

A whirlwind of drama ensues in the last 100 pages or so: John gets engaged, Christina is pregnant, Christina's childhood friend Tommy won't take no for an answer, Philip comes back, John's wife's younger sister flirts with Philip and won't take no for an answer, Christina cries, Tommy and Philip have a showdown while Christina watches naked from the bathtub, Christina gets shot in the head, Philip accuses her of laziness when she sleeps for several days after being shot in the head instead of breastfeeding their son, marriage, happily ever after, etc. etc. etc.

Honestly, this was...well, there's no dancing around it. CAPTIVE BRIDE is bad. Never once did any of Christina's reactions feel realistic to me, and I didn't find Philip attractive at all as a hero because of his many temper tantrums. It's hard to fall for a hero who acts more like a spoiled child than an alpha hunk. Also, some parts of the story felt unfinished - Philip doesn't seek revenge against Ali for nearly killing him, for example, and the jealous other woman in the camp, Nura, doesn't ever lift a finger against the heroine (maybe I've read too many Catherine Coulter novels, where the OW usually does something like selling the heroine into sexual slavery in a land far away).

I liked it, though. Lindsey knows how to tell a decent story, and there's nonstop action and dialogue to keep everything moving. As much as I rolled my eyes, I couldn't really stop reading, either, and the pages just flew by. If you're a fan of those old-fashioned sheikh/harem novels from the 70s and 80s, and don't care about whether or not your books are politically correct, or if you really liked E.M. Hull's THE SHEIK and want to read an updated version of that with actual sex, then you will like CAPTIVE BRIDE.