Living in Style: Inspiration and Advice for Everyday Glamour by Rachel Zoe 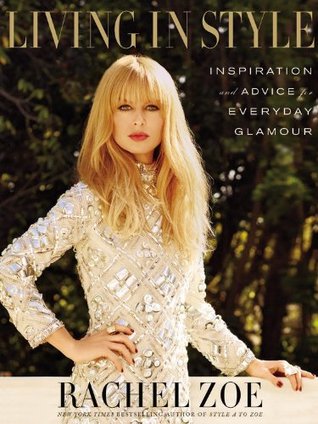 As a self-help book, this is pretty useless unless you have buckets of money (and even if you do have buckets of money, you have to enjoy spending that money on a certain kind of look - if you're not into Hollywood glam, this book may not be relevant even for you). I mean, she suggests designer macarons and Tiffany playing cards as gifts when you go to a party. That's the "let them eat cake" version of party etiquette. I was tempted to give LIVING IN STYLE two stars because of the second half of the book, which felt like it was just one big humble brag about her beautiful family and awesome life (for example, did you know that her husband left a trail of rose petals to a Birkin placed inside a Hermes bag for one of her anniversary presents? now you do!), but that would be petty. Also, the photographs were all gorgeous, not gonna lie. I had a pretty fun time looking at all those pictures of places I probably won't be going to and clothing brands that cost as much as some cars and don't even come in my size. It was conspicuous consumption at its most glorious. I can't fault someone who has succeeded in entertaining me for several solid hours like that.

The first half of the book is much more helpful, as Zoe gives style tips that can be utilized (for example, wearing a belt at the lowest part of your waist to elongate your torso versus wearing it at the center to give you an hourglass contour) and wearing nude heels in your skin tone (which she explicitly mentions, to her credit; so many people think nude means "peach" or "beige" - and it doesn't, necessarily, and certainly not exclusively) to elongate your legs (T-straps make them look shorter). And even though her go-to advice seems to be "buy vintage!" and "wear Chanel!", she helpfully includes pictures of clothes from designers who inspired her, clothes from her own collection (psssst...product placement!), and clothes from her personal wardrobe as a kind of look book to give you ideas. Sure, they're all expensive, but they're definitely adaptable. My favorite part of the book were the vintage photos of style icons and classic designers at the height of their relevance. God, the Jackie-O glasses and the vintage Chanel suits. I am dead, in fashion heaven.

Since the book was published two years ago and probably started well before that, some of the advice is already dated (I don't think cocktail rings are in anymore, and slouchy hobo bags are out & have been for a while), but many of them, like structured jackets, peplum detailing, and sequined statement pieces are still relevant. (I disagree with her about skinny jeans, though; I don't think you have to have a boyish frame to wear them - you can be curvier and still look good in skinny jeans, you just have to get them in a darker wash and make sure that the fit is right.)

The makeup portion of the book isn't very useful because it's super dated. Contouring and strobing aren't mentioned at all (in fact, Zoe actually advises against strobing in here, because it can make you look sweaty under certain lights - HA! NO ONE CARES ABOUT THAT! STROBE ALL THE THINGS!!! FULL FACE HIGHLIGHTER CHALLENGE! WOOOOO!). For eye makeup, she suggests the smoky eye, which has pretty much surrendered to the cat eye. Smoky eye is a very 2014 look, I remember they used to sell kits for it in department stores. No longer. Now it's all about those nudes and blending, blending, blending. Plus, again, the brands she mentioned are beyond most people's makeup budgets. Tom Ford lipsticks, NARS blush, and Givenchy mascara, woman? Do you have any idea how many Revlon and Covergirl sh*t I could buy with that kind of cash?)

As for the second half of the book, this runs the gamut from how to throw a party, to how to buy gifts for others, to interior decorating ideas, to wear to go on vacation (expensive beachy places!) and what to wear while on said vacations. One of the dilemmas in this latter portion is the utter frustration of trying to find footwear for the snow that keeps you warm but still looks cute and feminine. Zoe also talks a lot about her son and husband in this section, which I didn't mind too much because it's sweet, but I think people who are buying this book for style tips might be annoyed that it's not actually a fashion look book and more just like an extended opinion piece in a fashion magazine.

That said, I enjoyed LIVING IN STYLE. I like and admire Zoe's sense in fashion, and even though most of her staples are well beyond my budget (the nicest dress I have in my closet right now is a Kate Spade sheath dress that I bought on super mega clearance), I think her look is highly adaptable. The format of this book is questionable, and will appeal to some or irritate others, depending on what their expectations were. I got this book from the library, so I had no financial stake, but if I had purchased this book for fashion ideas, I'd probably ding off another star for my troubles. I'd love to see Rachel Zoe publish an actual look book or style guide, with photographs and examples of every look she talked about, plus a modernized makeup guide that actually includes contouring (SEPHORA published a nice one, but it's geared mostly toward teens - looks for adult women would be a hit).

Overall, I'd give this book a 3. It was a mix of helpful, amusing, and eye roll-worthy. Probably be better for women who follow fashion more closely than I do, and budget more for it than I do.