Masque by Gaslight by Virginia Coffman 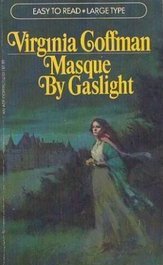 MASQUE BY GASLIGHT is one of those books that I've just had sitting around. I bought it on impulse, because I love the vintage Gothic novels from the 60s and 70s - they're so melodramatic, everyone's a potential villain, and yeah, they're just great. >:D

The heroine of MASQUE is a girl named Kitty Temple, who comes from America to France in 1858 to stay with her godmother, the Comtess Adele de Sens. Accompanying her as a chaperone is her harmless but rather self-centered aunt. There, they meet the godmother and her young maid, the beautiful Pepine Flan.

Paris is beautiful and glamorous, but the parts of it that Kitty sees reveal a darker side. Her godmother's house is spooky and rundown, threadbare beneath the rich trimmings, and a murderer is running loose through the streets of Paris, a man the locals call the "monster", stabbing young women. Hot on the case is the attractive Inspector Giles Debray, upholder of justice, breaker of hearts. He intends to bring the murderer to justice.

The murders seem to be loosely inspired by a play that's currently all the rage in Paris. A vampire play, inspired by the work of Polidori. The actor in the play is the dashing Colin Venner, son of disgraced nobility. He seems to enjoy Kitty's company - far too much for Pepine's liking, as she would like to be his paramour, as well, despite the fact that she's engaged to the butcher. Drama!

As the story goes on, and Kitty makes a couple of near escapes, she begins to wonder if perhaps she's the next victim of the monster - or if not him, somebody who's intent on copying his work - and why.

Sometimes these Gothic novels can be hit or miss. I read a particularly insipid one not too long ago called MISTRESS OF THE MOOR (and look, I describe them as hit or miss there, too). When they try to get too cute, or feature a heroine that's a little too TSTL, the story can be wearing. MASQUE was decent, though, because the writing style is lively and fun, Kitty is a rather sneaky heroine who enjoys her rivalry with Pepine over the various cute boys' affections, and the atmosphere is quite well crafted. Between the sinister masquerades and the vampire plays, it was pretty engrossing.

If you get the edition that I have, though, don't read the back - it has a major spoiler. -_-

Oh, and check out what I found in the heart of my copy: an ad for a brand of cigarettes that isn't even made anymore! I thought that was too funny, and just had to snap a picture. (The back of the ad features the "male" version, with a 70s action hero-type guy sitting on a log with his feet buried in the sand and his mustard-yellow sweater tied around his neck. Above his head, it says, "After all I'd heard I decided to either quit or smoke True. I smoke True." Copyright on both is 1976.)