Garden of Shadows by V.C. Andrews 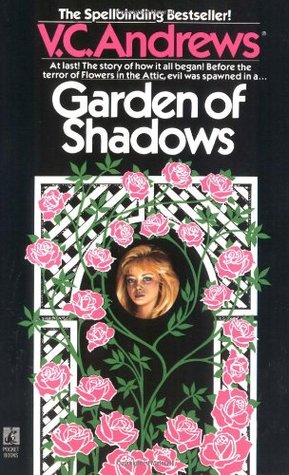 If you've read the Dollanganger series, you probably remember that the grandmother character in FLOWERS IN THE ATTIC had serious issues. But how did she get that way? Aren't you curious?

GARDEN OF SHADOWS is about a girl named Olivia. Tall and plain, she's been raised her whole life as the son her father wanted but never got. Beneath that homely brow of hers is a sharpened mind, and an almost heartbreaking desire to be loved and adored. She's absolutely thrilled when she finds out she's to marry a protege of her father's: the dashing and debonair Malcolm. He seems to like the fact that she's not like other woman, and proposes to her early on. But things are not what they seem, and happiness is elusive.

This is one of those books that, like the first two in the series, actually had me setting the volume aside, taking a deep breath, and thinking to myself, "WOW, THAT WAS SO MESSED UP." Over the course of the novel, we see Olivia, maddened with jealousy, betrayal, and impotent rage, slowly lose her desire to please and be loved; instead, she becomes cruel and controlling, using fear to influence where she failed at charm.

And oh, her husband, let's not forget about Malcolm. He never got over his mother leaving him when he was a child, and it's given him a severe complex about women. When his wife still loved him, he flirted with other, prettier women in front of her eyes and let them mock her without saying a word. When his father remarries Alicia, and Malcolm lays eyes on the stepmother who is the spitting image of his own beloved mother in her prime, he sneaks into her room at night and rapes her for months. When she becomes pregnant, Olivia locks her away in the attic and Alicia eventually goes mad.

Then there's Corinne and Christopher, the two who started the Dollanganger legacy...

I'm honestly shocked that this is marked as young adult on Goodreads. Maybe it's because so many people managed to get their hands on these volumes as children and teens, and the parents were none the wiser because of the innocent (but creepy) looking covers and titles. They're tawdry, and full of abuse, incest, sex, and corruption, and people being murdered or tormented.

That said, as a Gothic novel for adults, it's quite compelling. Andrews has a unique and adaptable style, which she manages to tailor for each of her narrating characters while also keeping true to her own style. She's excellent at foreshadowing and providing just enough drama to keep readers turning the pages without every overwhelming them. They're atmospheric and trashy, but not dumb in the slightest. I've thoroughly enjoyed every book in this series I've read, even if they're a bit much.

Now I kind of want to reread the first two books in the series to see if Olivia's narrative reveals any further clues with the power of hindsight...