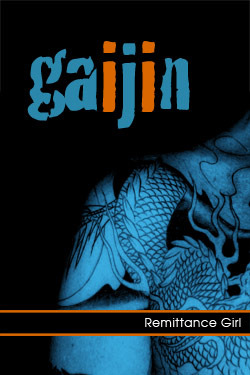 From just beneath his collarbone, over the entire surface of his chest, to the black band of fabric at his waist, was a garden, a zoo, a kaleidoscopic riot. Across one shoulder and down the right arm, almost to the elbow, flaming peony petals rippled against the wings of Luna moths. On the other side, fat gold carp swam over his bicep in a sea of waving blue-green pond weed (16).

How do I begin to describe GAIJIN? After three reads, a perfect summary still eludes me. Certainly, it is a book that is not for everyone. I know a lot of erotica these days like to make that claim, as though being "not for everyone" is their cred for being edgy and different and forbidden, but in the case of GAIJIN, it is not just a lure to bring in more readers - it is actually the truth.

GAIJIN is about a waitress who is kidnapped and then held captive by a member of the Japanese mafia after she inadvertently offends him in front of his men and the other bar patrons. He kidnaps her, pierces her, and then rapes her several times, and their relationship becomes even more complicated from there as she gradually begins to know him and understand what drives him.

I'm sure GAIJIN will offend some and disgust others, and I would understand both those reactions. But it's also a very well written story, and compelling for the right audience.

There were no honourable samurai, no koi fish swimming in the rivers, no flurry of wild cherry tree blossoms in sacred forests, no imperial dragons cavorting in the heavens. Not anymore. There were drab factories, and rusty shipyards, a million banal offices, and gangsters like him (50).

I received my review copy from the author.