Suddenly You by Lisa Kleypas 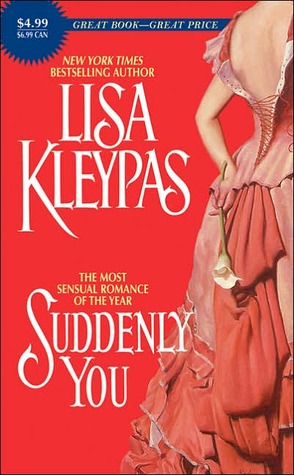 I've been wanting to read this standalone by Lisa Kleypas for a while now. One, it's a standalone, so I don't have to worry about acquiring the rest of the must-have series; and two, it's about a heroine who is a writer and a hero who is a publisher, and there's plenty of delightful book chatter, which I love.

I finally finished the book today (weekend!), and it was a solid addition to Kleypas's already considerable repertoire. Set in the very last year of the regency era (1836), SUDDENLY YOU starts off with Amanda Briars, who is not very happy about being single, alone, and thirty (although not necessarily in that order). Her unusual profession, a litany of family sorrows, and unfashionable figure have prevented her from landing a match the way her sisters have, so when we first meet her she is consulting a madam in a brothel about having a male prostitute delivered to her house for her thirtieth birthday. At the last moment, she decides to renege, little knowing that the surprised man who greets her on her porch that day is anything but a prostitute.

Jack Devlin is probably one of the better romance heroes I've read this year. He's the alpha hero done correctly - strong, capable, possessive, and charming, but not psychotic, and willing to yield to the heroine, ask for consent, and give her space when necessarily. The romantic scenes between Amanda and Jack were awesome...although incredibly numerous. My friend sraxe pointed out that the last half of the book actually got a little boring because there was so much sex crammed into it, and I agree; SUDDENLY YOU has way more sex in it than any other Kleypas book I've read to date.

And as much as I wanted to like Amanda's character, her constant put-downs of herself were wearing after a while. It made me sad, because some people are that insecure, and I liked how the love of a good man just didn't instantly fix that and make her think that she was a love goddess, but it was annoying to read about nonstop about how Amanda thought she was too heavy and too short, over and over. I also didn't like how she reacted to a traumatic event at the end. Said traumatic event was thrown in without warning towards the end of the book and seemed like a last-ditch attempt for drama. Amanda reacts in an insecure fashion, and puts Jack through the emotional wringer.

SUDDENLY YOU is still a decent read, though. The book chatter was wonderful, and I almost wish that some of the sex scenes had been cut out to expand on the glittering Regency publishing world. There were so many interesting characters in SUDDENLY who were introduced only fleetingly. That said, Jack was awesome, and probably this book's saving grace. If you enjoy books about books, older heroines, and kind alphas, you will probably enjoy SUDDENLY - especially if you like erotica, too.