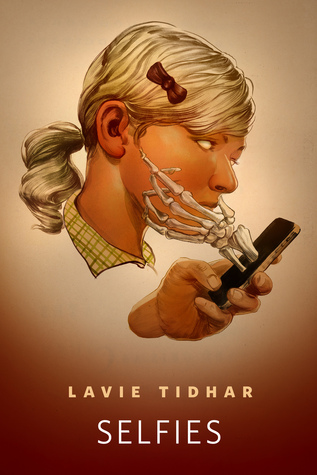 Mirrors have always vaguely creeped me out, helped in part by such delightful films as Mirrors and Occulus. There's just something about the idea of something stealing and perverting your image into something demonic or evil that's, well, creepy. When you think about it, cameras are much the same.

SELFIES takes that concept and runs with it in a creepy short story about a girl named Ellie who buys a phone from a kiosk in the mall and starts talking lots of selfies with it. The problem is, some of the selfies don't look right. And the more pictures she takes, the more wrong they look, until suddenly, she starts seeing her face everywhere she looks...only it isn't exactly hers.

This story is very creepy and sent shivers down my spine, but from a technical standpoint, I do feel like it could have been constructed better. The beginning spoils the end, and the details of the story are so vague that you're never really sure what, exactly, is happening. I still wasn't sure what was happening by the end.

Still, SELFIES is free (from Tor.com) and is an interesting (and creepy) take on vanity in the technological age. Read it, if you dare. Just not at night. And not before taking a selfie. o.o