A Cup of Salt Tears by Isabel Yap 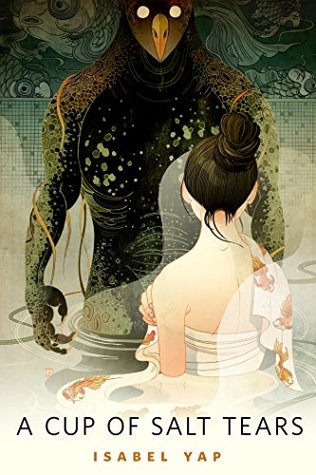 According to Japanese folklore, the kappa is a Japanese river goblin that drags people under the water to eat their organs and soul. The top of its head forms a shallow bowl that is constantly filled with water. Kappa can be defeated by tricking them into a deep bow, causing the water that is the source of their power to spill out. They can also be appeased by carving one's name into a cucumber (their favorite food) and tossing it into the water.

Makino is familiar with kappa lore, so she is understandably afraid when she is approached in the bath by a kappa. He claims to have saved her from drowning when she was young, and says that it's because he's in love with her. But Makino's husband is dying, and cannot be cured. The kappa might be able to help her, but his help will come at a steep cost.

This story was beautifully written and I learned some interesting things about Japanese folklore - specifically, that kappa are not always malicious; they are curious, polite, and interested in humans; they're so much more than just another flesh-eating monster.

There's actually a song by a Japanese artist called "Kappa" (by Keiko Matsui) that is supposedly inspired by the Japanese myth. I listened to that song while reading this short story, and they paired incredibly well. It is a mysterious and bittersweet song that perfectly matches this story in tone.

"I could take everything inside you and leave nothing but a hollow shell of your skin. I do not forget kindness, but I will let you forget yours, if it will please you."

This is a solid addition to the Tor.com repertoire, but the characterization that makes some of the other stories on the site so spell-binding is absent. Still; it's an interesting take on a Japanese legend, so if you're interested in Japanese folklore, I'd recommend it to you for that reason alone. :)