Out of the Easy by Ruta Septys 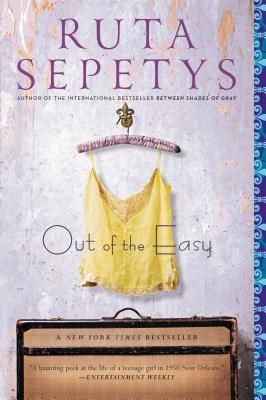 Reading this book seemed to take forever, and it took me a while to figure out why I kept setting it aside. On the surface, OUT OF THE EASY is everything I like in young adult fiction: interesting and diverse cast of supporting characters, a flawed and often selfish heroine, real world issues dealt with in a real and darkly edgy way, and a bit of romance that doesn't overshadow the story. All of these things are wonderful, and the story is written in lovely prose that's easy to read and invites you to enjoy yourself. "Come on in," it would say, if it were a person. "Settle down, put up your feet, and I'll put on the tea while I tell you a story."

The problem is, I just couldn't bring myself to care about any of it. Part of that may be because OUT OF THE EASY is a mostly character-driven story. Part of that may be because I'm burned out on heroines with abusive mothers who have to carve their way out of the trenches in order to save themselves. I've heard that story a hundred times over since the first time I read WHITE OLEANDER. The heroine in OUT OF THE EASY, Josie, is the daughter of a whore and desperately wants to leave New Orleans, to be free of her neglectful and self-centered mother to start her own life. After she meets another young woman in the bookstore she works in, she decides she wants to go to one of the fancy colleges in New England, rather than one in Louisiana. Then a murder happens, and her mother may or may not be involved in it, and poor Josie is swept up in the mystery of it all, as well as applying for and saving for college and eluding various sinister villains.

Despite all that, there isn't a lot of action. Most of the scenes involve Josie walking around, talking to people or running errands. Or working in the bookshop. Or talking to Willie, the madam of the whorehouse Josie's mother works at. I was really disappointed, because all my friends swear by this author. They rave about this one and about her more famous one too, SHADES OF GREY. Given all that hype, I was really surprised that OUT OF THE EASY fell so flat for me, because the people who were reviewing it so highly were people whose opinions I hold in very high regard.

If you enjoy intimate and intricate character stories where the focus is on the look and feel of the characters peppering the world of the narrator, then you will enjoy OUT OF THE EASY, because all of the characters are colorful, and they all get a say. You'll get to relax and put up your feet, and the story will take its sweet time unfolding for you while you soak in the essence of 1950s New Orleans. If you are looking for a fast-paced story with a lot of action, however, and prefer to be on the edge of your feet instead of putting them up and kicking back, OUT OF THE EASY may be too slow-paced for you.