Quackery: A Brief History of the Worst Ways to Cure Everything by Lydia Kang 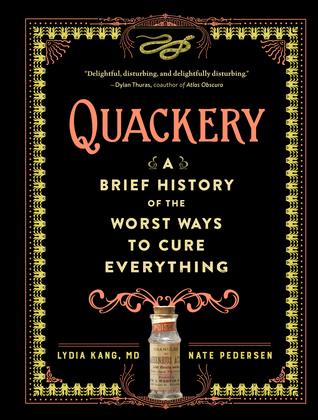 I bought this on impulse a few days ago because it was on sale in the Kindle store and I recognized one of the authors. Lydia Kang writes really inventive medical-themed historical fiction, including THE IMPOSSIBLE GIRL, which I loved. The caliber of her medical writing really shouldn't be surprising since she has an M.D. and, according to her Goodreads profile, works as a doctor when she's not penning fiction. I have never heard of Nate Pedersen, the co-author, but if he was working with Kang, I assumed he was awesome. I assumed correctly; this book was awesome.

QUACKERY, as the title suggests, is a history of bunk medical treatments. Some are merely hilarious, whereas others are tragic or perilous. Good health is a concern that has plagued humanity since the dawns of time, and given that we're also afflicted with the grim certainty of our own mortality, it isn't really that surprising that we'd go to extreme measures to ensure not just survival but also a long life.

QUACKERY is like the younger sister of this other book I read, THE ART OF POISON. There's a Latin quote, "The dose makes the poison," adapted from a quote by Paracelsus, "All things are poison, and nothing is without poison, the dosage alone makes it so a thing is not a poison." Often things that are poisonous can be beneficial in small doses, and things that are beneficial can be poisonous in larger doses. One prime example of something seemingly harmless that can be dangerous in large doses? Water. Obviously water is necessary for life, but if you drink too much of it you can get something called "water intoxication" which occurs as a result of electrolyte imbalance. It's fitting then that one book focuses primarly on the more malicious applications of these substances (e.g. greed, murder, stupidity), whereas this book, QUACKERY, focuses on people attempting to use these substances for good health (although greed and stupidity feature prominently here, too).

Grossest medical treatment: There were a lot of contenders, but I still can't quite wrap my head around the idea of antimony pills (which were also mentioned in THE ART OF POISON). Antimony is a heavy metal and toxic. Eating it gives you the sh*ts (in addition to other health problems), and in the 1800s, it was a popular purgative used to clear the bowels. It does not break down in the human body, so the pills largely remained intact after passing through the body, which led them to be called "the everlasting pill." People would fish in their toilets to recover the pills after use, and sometimes they were passed down within the family. You hope they washed them first, but given how gross people were back then, they probably just let them dry off. Barf.

Weirdest medical treatment: Again, tons of contenders, although one that stuck with me was the female medieval doctor Trota of Salerno's method for contraception: having a woman take a pair of severed weasel testicles and wearing them in her cleavage. I mean, it could work - seeing your wife or lady friend wearing the castrated byproduct of a small male animal doesn't exactly put you in the mood, and it probably didn't smell great either - but this is probably less medicinal and more WTF.

Most cross-your-legs-and-cry medical treatment: Leeches being applied to the cervix to help with menstrual problems. No thank you, I am moving to space.

Medical treatment I knew about but you might not: Coca-Cola used to contain cocaine and was marketed as a brain tonic. The authors failed to mention the equally interesting corollary: that 7up used to contain small amounts of lithium citrate, and was called "7up Lithiated Lemon Soda."

QUACKERY was a really great book. I couldn't put it down and have spent the last two days gleefully reciting facts from this book to various people in my social circle (I'm limited somewhat by what is work/socially appropriate, although my family got a kick out of the weasel testicle treatment). If you're interested in history and enjoy knowing random pieces of trivia about a very specialized subject(s), this is the book for you. I am now fully equipped in all sorts of snake oil treatments.