Mennonite in a Little Black Dress: A Memoir of Going Home by Rhoda Janzen 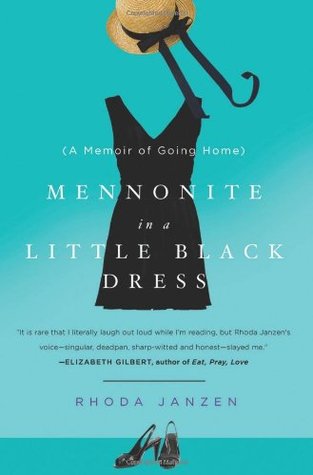 I'm actually shocked by how many people seemed to dislike this memoir. It has a rather grim 3.17 average rating as of my writing this review, and a lot of the negatives are rather scathing. I have a soft spot for books with low ratings and thought the premise was intriguing, so I threw caution to the wind and picked up the book anyway. I enjoy memoirs written by women, especially if their experiences differ vastly from my own. As a non-religious person, I was immensely curious about what the life of someone raised in the environment of such a restrictive religion must be like.

Rhoda Janzen was raised as a Mennonite, which is very similar to being Amish except slightly more liberal - modern clothing is okay, and they don't appear to abstain from using technology. As an adult, she went her separate ways and ended up marrying a man who had bipolar disorder and was also bisexual, who turned out to be abusive and then left her for another man. As if that weren't enough, at the end of her marriage she had a hysterectomy that resulted in two of her organs being punctured, corrective surgery, and a pee bag. So basically, life was pretty sucky for her.

Ms. Janzen recounts her interesting life with a lack of political correctness and good humor. It's hard not to admire her seemingly indefatigable spirit, or be amused by her interactions with her family. Some of the negative reviews for this book said that her treatment of her family seemed cruel in print, but honestly, their portrayal seemed more quirky and eccentric than malicious; I've read RUNNING WITH SCISSORS, after all. I actually really liked her mom a lot (not her brothers, though).

At the back of the book is a brief history about the Mennonite religion, as well as some recipes from Mennonite cooking. I learned a lot about Mennonites by reading this book, and I really enjoyed the stories of Janzen and her family. She's a professor now, and has near-perfect grammar. Her sentence structure was a pleasure to read - I say that as a grammar snob, myself - and her sense of comedic timing is fairly hilarious when she's being funny. I'm not sure why this book seems so unpopular, but I'm guessing the religion angle and her seeming disdain for propriety contributed to that.

Well, I liked it.