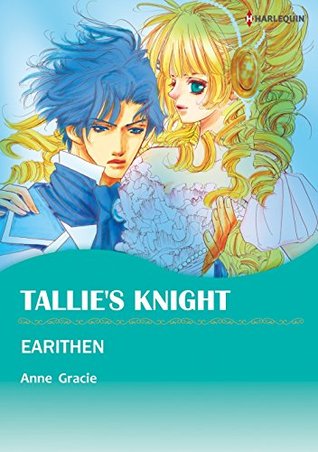 For whatever reason, the historical Harlequin manga don't seem to go on sale as often as their contemporary counterparts, but this week appears to be my lucky week because not one but two Harlequin historical romance manga went on sale: this book, TALLIE'S KNIGHT, and THE BARTERED BRIDE. The joke's on me, though, because it turned into a monkey's paw sort of situation where even though I got what I asked for, it didn't really turn out the way I wanted, so I ended up just as unhappy.

My first clue that something about this book was amiss was that the mangaka is Earithen. Earithen is an artist who is very hit or miss. I've liked a couple of her adaptations but she has a very unpolished style; her art looks like something you'd see on Deviantart from one of those mid-tier anime artists from the mid-2000s who had an overly fond penchant for the dodge tool.

I rate Harlequin manga adaptations based on several categories and my ratings for them is unique for manga, meaning that a five-star manga book is not equivalent to one of my five-star reviews for a standard format romance novel. When reading these, I take many things into account, such as the presentation of the pages, readability (too text heavy? too much white space in the panels?), the art itself, and, of course, how entertaining the story is in and of itself.

TALLIE'S KNIGHT is about a girl named Tallie who is a distant orphaned relation of this wealthy family, headed by a bitchy matriarch named Laetitia. Tallie watches Laetitia's kids without pay in exchange for room and board, and some very ugly hand-me-downs. One day while watching the kids during a party, she overhears this hot guy named Magnus looking for a bride with "strong teeth and hips" because he's interested in producing an heir. He decides that person is Tallie after he overhears her preventing an "Old Yeller" sort of punishment when one of the kids' puppies interrupts the party.

Tallie asks that in exchange, he take her to Italy to find her younger brother and he says that's fine, but if she gets pregnant he's cancelling the trip. Sex is a tricky terrain because Laetitia has equipped Tallie with bad information in the hopes that Magnus will break up with her, and Magnus has Mommy Issues™ because his dad was basically his mother's slave, and he has no interest in being made into a love-struck fool. Unfortunately for him, Tallie is really hot without clothes. Whoops.

The art and formatting in this book really isn't that great, especially when compared to the art on the cover. You think you're getting something nice and then you end up with pretty basic anime and some truly ugly font. I don't know what the artist was thinking, going with that font. It looks like Arial, which is much too modern looking for a historical romance, in my opinion, especially in those word boxes. The translation - I'm assuming from Japanese - also feels very half-assed, with some odd, clunky word and grammar choices. It was not very fun to read.

TALLIE'S KNIGHT was a disappointment. I wouldn't recommend it.