Challenge to Honor by Jennifer Blake 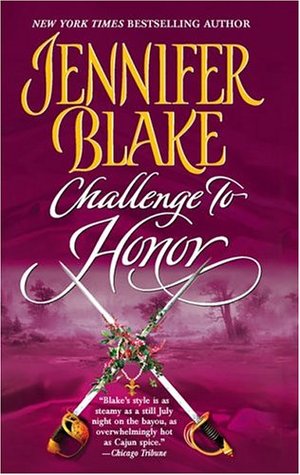 Fact: if I go too long without reading a trashy historical romance or a bodice-ripper, I start to get itchy. It's been weeks since I picked one up, and I decided to rectify that by reading one of my favorite authors, Jennifer Blake. Jennifer Blake can be a bit hit or miss, but she strikes it out of the park more than most of her cohorts, and has penned two of my favorites, NOTORIOUS ANGEL and ROYAL SEDUCTION. I'm pretty open about the fact that a lot of the books I enjoy contain problematic content, and one thing I do caution people who are new to Blake is that a lot of her older stuff has "forced seduction," which is basically a euphemism for rape that ends up becoming consensual by the skin of its teeth for the sake of not squicking out the audience (spoiler: it does, anyway, because rape). CHALLENGE TO HONOR, on the other hand, is one of her "newer" books (published in 2004) and to my surprise, even though the hero is still cast in the same sexy dangerous role as her classics, there is no forced consent and the heroine drives the interactions. So I guess this is where old vs. new bridges the gap. Good to know.

CHALLENGE TO HONOR starts with a bang and continues on that trajectory with one of the most action-packed plots I've ever read in a romance novel in a while. It's set in 19th century New Orleans, in the French Quarter. The heroine, Celina Vallier, has just learned that her younger brother has challenged the most deadly swordsman in the city because of a slight on her honor. Celina, who lost her older brother to a duel, can't bear the thought of losing him, so she goes to the swordsman, Rio de Silva, to plead her case. To her surprise, Rio agrees to deliver only a glancing blow, even though doing so will tarnish his own honor and cause other duelists to call him out to test out what they perceive as his failing strength. In return, he wants to sleep with her.

I was bracing myself for the usual blackmailed mistress trope, but the story proved much more complex. As it turns out, Rio hadn't smeared her to insult her brother, but her husband-to-be, the sinister and odious Count de Lerida, with whom he has history and wants revenge. Rio is also surprisingly gentlemanly and charming, and has some excellent lines (her heroes always have the most amazing lines). The swashbuckling duel scenes were also amazing, and the overall vibe of the story reminded me pleasantly of THE THREE MUSKETEERS, only with more romance.

The side characters are also great. I loved the other sword masters, who are the heroes in the other romance novels in this series. Celina's relationship with her slave/maid were great, and I loved that she freed her at the end as soon as she was freed from her father's power (slavery is bad). Olivier, Rio's servant, was just as noble as the man he served. And Celina's aunt, Tante Marie Rose, was a rare example of a positive maternal influence in these sorts of books. They even have a rather frank discussion about sex. The descriptions of food and architecture are also delicious, and there's a very sexy masquerade ball scene, which is a trope that doesn't happen often enough (thanks, Labyrinth).

If you're a fan of action-packed romances with chivalrous heroes and somewhat strong heroines, this is a really good pick. I went in with tempered expectations and it totally blew me away.