The Virgin's Secret by Nei Nowaki 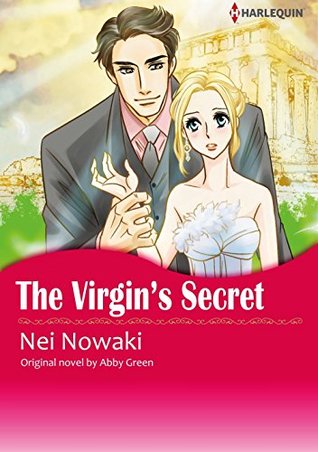 Before reading this book, I wondered what the virgin's secret was. Was she actually not a virgin? Was he a virgin? But no, apparently the fact that she's a virgin is the secret, so shame on you, THE VIRGIN'S SECRET, for putting that big old spoiler in your title. That's like if Harry Potter and the Half-Blood Prince was called Dumbledore Dies in This One. Bad move.

THE VIRGIN'S SECRET is actually one of the better Harlequin manga adaptations I've read. When reviewing these books, I tend to group them in their own category and assign the rating based on a number of factors, from the readability of the panels, to the style of the art, to how well the story seems to have been adapted to fit the manga format. VIRGIN'S SECRET does well on all counts, and the story itself is good, too.

Angel Kassianides is part of a disgraced Greek family that lost all their money and fell into ruin after tangling with another distinguished family, the Parnassuses. She's therefore horrified when her latest catering job leads her to have an encounter with none other than the heir apparent to her family's archnemeses, Leonidas Parnassus. Uh-oh.

Naturally, she does the low-key thing, by which I mean she displays no chill at all and flees like the hounds of Hades themselves are after her when he tries to put the moves on her (he has no idea who she is). Of course, her fleeing from his handsome, debonair, playboy self raises all kinds of red flags, he looks into who she is, and figures out her identity. Angel, on the other hand, learns that her father has managed to obtain a copy of the Parnassus family will and plans to ruin the family by spreading word of the matriarch's suicide, before laughing drunkenly and passing out on the sofa.

Angel tries to return the will, but Leonidas is waiting for her, accuses her of stealing, and then tells her that he's figured out who she is and that her sister is pregnant with the baby of one of his business partners. He tells her that unless she becomes his mistress, he won't put in a good word for her sister Delphi and allow the two of them to be married. So ONLY for her sister's sake, not because of her traitorous body, does Angel agree to this arrangement despite being a Virgin.

She is very ashamed of being a virgin because her last boyfriend dumped her for it. As with skinny-shaming of heroines with slim or boyish figures, virgin-shaming is also a very popular trope in romance novels where attractive but sexually inexperienced women are treated badly for being -horror scream- virgins. Being picked on for "flaws" that aren't actually flaws seems to be a running theme in trashy books, because you know, rather than doing the legwork to write a flawed character with actual body dysmorphia, health problems, or socioeconomic issues, let's just make a Special Snowflake character who looks like a supermodel but is treated like she isn't. #BodyImage

Leonidas is delighted with this news, however, because he gets to be the first! WOO-HOO! Their relationship develops and he learns that Angel has a talent for jewelry-making, so he gets her her own jewelry studio so she can commission pieces for one of his friends' wives. Unfortunately, Angel walks in on one of the most popular Big Misunderstanding tropes in romance novels, That Incriminating Conversation I Was Having in Another Room/on the Phone That You Weren't Supposed to Hear and Probably Took Out of Context, and Even Though Five Minutes of Conversation Would Clear This Up, Let's Just Pull a Flounce™ moment.*

*Or you know, TICIWHiAR/otPTYWStHaPTOoCaETFMoCWCTULJPaF™, for short.

The book ends with the hero learning out that the heroine has flounced all the way to Ireland and is pregnant with his baby. There is an HEA, because of course there is, and it only took a flounce to not just change him of his ways, but also make him realize that his mother's suicide was the reason he developed major mommy issues and decide that love was garbage and no woman could be trusted.

I probably would have given this a higher rating if not for the flounce/misunderstanding. That's one of my least favorite tropes in romance novels, right up there with cheating. But whereas cheating offends me on a moral level, misunderstandings offend me on an intellectual level. I can't stand stupidity, and when people are willfully stupid and revel in that stupidity, I roll my eyes in disgust. Just. Freaking. Talk. To each other. It's not rocket science, which is probably a good thing, because imagine if rockets could flounce. "Screw ready to launch, I'm out, bitches!" Yeah, no.

THE VIRGIN'S SECRET is a fun, light read and one of the better adaptations I've read. Bar the ending, I probably would have given this five stars. I will be looking for more work from this mangaka. Just remember, the next time you read a romance novel and find yourself face to face with a big misunderstanding, ask yourself, "What would a rocket do?" You're welcome.