The Frenchman's Mistress by Ryo Arisawa 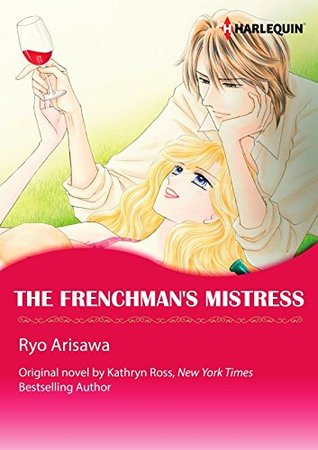 I'm obsessed with Harlequin manga. They combine two of my favorite trashy reads: comic books and romance novels. It's one of those combinations that you think shouldn't work, like peanut butter and pickles, and yet, once you try it, you're hooked. (And yes, unbelievers, peanut butter pickle sandwiches are a thing.) They seem to have been Japanese-exclusive, but due to what I'm guessing is a demand for trendy Japanese things, they have made the transition to the West. We're all winners as a result. The prize? Trashy, pickley goodness.

THE FRENCHMAN'S MISTRESS is one of those oddly specific romance novel titles that basically sums up the premise of the story in a single sentence. Harlequin is fond of those, and indeed, many of them are interchangeable. I'm sure there's a romance novel generator out there built with AI that spits out gems like "Greek Tycoon's Secret Christmas Baby" and "A One Night Stand with the Sultry Sheikh." (I'm making these up, FYI, but they could just as easily - and might - be actual titles.

In this case, the title is misleading, as she is not really his mistress, as that tends to imply a woman who is either the OW of a married man or a "kept" woman of ill repute (e.g. a high class escort). Caitlin, the heroine, is a nurse. She used to take care of this man named Mard, who wanted to set her up with a young friend of his named Ray. Unfortunately, the two of them disliked each other on sight, despite Mard's attempts at playing matchmaker. After losing everything to a gambling ex-fiance, Caitlin was left with virtually nothing, so in his will, Mard bequeathed his Provence home to her.

Ray wants the land, and is unhappy that Caitlin got it for free despite his many attempts to buy the property from Mard. He makes the same generous offer to Caitlin, who turns it down - not just because she likes the idea of living in the country side and enjoys the project of a fixer-upper, but also because Mard explicitly stated in his will that she had to live in the house for at least six months first.

As Caitlin works on the house, Ray gets involved and helps her out. It seems like they might actually be falling for each other and then Caitlin finds out that there was an additional part in Mard's will that nulls out the six month requirement: if she marries Ray, she can do whatever she wants with the property, and he's even set aside a lump sum of money for them as a wedding gift. Meddling from beyond the grave! Now that is some serious dedication. Matchmakers everywhere, take note.

I thought this book was okay. The art was nice, albeit a tad basic, and I thought Ray and Caitlin were good characters in that they actually act like adults and not fussy children (which seems like it should be common sense, but you would be surprised at how fussy some of these allegedly adult characters are). It's not hard to see how Caitlin couldn't resist falling for a handsome French guy. I don't know how French became the language of love and English became the language of people who eat hamburgers and act like buffoons while traveling abroad, but it's bloody unfair. Quelle dommage.

P.S. The wine on the cover looks like cherry Kool-Aid. 10/10 would probably still drink.