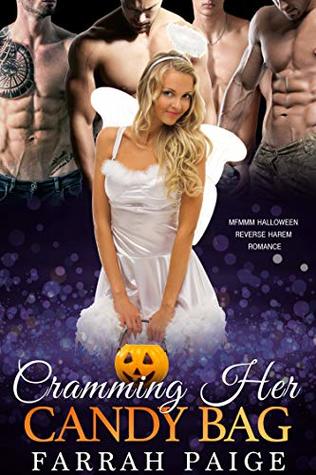 There are many popular reviewers on Goodreads who enjoy reviewing New York Times best-sellers and the latest trendy young adult book, but I'm not about that life. I enjoy reviewing out of print bodice-rippers and weird erotica with titles like CRAMMING HER CANDY BAG. I'm actually a little disappointed because I was hoping this was going to be an erotica about a woman having sex with actual candy, kind of in the vein of those bizarro erotica shorts like I FUCKED FROSTY or BAGGED BY THE GROCERIES. karen reads a lot of these, and I find them equally terrifying and hilarious.

A messy break-up ensues, rife with fat-shaming (because he would go there). Melanie self-pity shops for vintage outfits and a sexy costume for the mandatory company Halloween party and then masturbates at work, thinking about doing her execs. At the party, we learn that all four of her bosses have been lusting after her since she was hired. Sex quickly ensues, with some of the most terrible scenes I have ever read, and some truly heinous euphemisms that are straight out of Bertrice Small, like "love box."

It was like drilling for pleasure and hitting a big vein, only we were using our flesh drills and the oil was her unending squirts (87%).

There's a brief blip in which Melanie learns that they were attracted to her when they hired her and is afraid that maybe they didn't actually bring her on to the team for any professional skills. The men all panic, as visions of lawsuits dance in their heads, but they come to the conclusion that she won't sue the firm because she's a "kind and compassionate person," which, wtf. Way to victim-shame.

Including the men's POVs in this book was a big mistake, I think, because all they do is hate on HR and objectify Melanie.

Those harpies at HR could all go to Hell. We were human, dammit! And this was our humanity, giving our bodies to each other! (58%)

At least it has a happy ending, though. She marries all of them (although since bigamy is illegal, what I think she actually does is marry one of them officially and live with all of them unofficially) and they live polyamorously ever after. And the whole company (including, I'm assuming, HR) comes to their wedding and all of their clients are 100% fine with this. Because that's totally realistic.

One thing to note: in the ebook, the author has embedded some links asking for reviews and encouraging you to sign up for her mailing list at the end ofthe book. When I accidentally clicked on this link, it appeared to be a malformed URL and was blocked by my web browser, which is potentially suspicious, so be cautious about clicking on the hyperlinks.