A Convenient Wife by Marito Ai 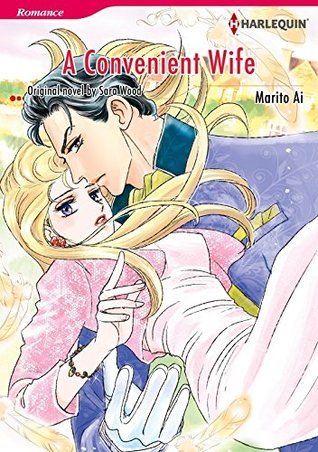 Wow, this is my third Harlequin manga adaptation from Marito Ai and it was amazing, I loved it so much. I don't know if Ai is a big romance reader herself, but no matter which author she's adapting from at the moment, her work is amazing! When I rate and review Harlequin manga, I grade the books based on the art, the story, the readability of the manga format, and how well the text and art "present" on the page. Marito Ai's work is one of the few that's been consistently amazing. She has a fantastic (but unique) art style, she uses great fonts, and the panels are very readable. When I read her work, I have no complaints.

A CONVENIENT WIFE is also a really great story, and this is one of the manga adaptations that actually made me want to go out and hunt down the original. Blake is the heir of a manor home in the UK and lives there with his mother and his son, Josef. One day, Josef finds a pretty lady with a baby crying and scattering ashes in the cemetery next door. The woman is named Nicole and she is the daughter of Blake's prodigal uncle.

Blake is suspicious of Nicole's presence here because Nicole's father was a drunk and a wastrel, according to Blake's mother, who told him never to seek him out. You see, Blake is not the natural heir of the property. His father was a Romani man his mother fell in love with, so he doesn't have any of the paternal Bellamie family blood. If Nicole wanted to make claims over the house and land by saying that her young boy, Luc, was heir, she could easily dishinherit both Blake and his young son.

But as it turns out, his father's identity wasn't the only thing Blake's mother lied to him about. Nicole's father was a good man, an artist who had no interest in money. The drunken wastrel she was describing was actually Blake's own father (the non-Romani one), Darcy. Worse still, he is falling for Nicole but is afraid that she will only believe him to be after the property titles if she finds out the truth his mother has been trying to hide for years.

Marito Ai seems to be a huge fan of dramatic stories about rich people and inheritance - which is a huge plus for me, because I am, too. One of her other stories I've read, MISTAKEN FOR A MISTRESS, employed similar themes. I was lucky enough to get a copy of it as an ARC and it was amazing. Her art style is so emotional and she does a really good job of capturing important scenes beautifully on paper while also condensing a story in a way that makes it feel whole.

I hope more of Marito Ai's books go on sale. I've read three books by her so far, and really enjoyed all three of them, even the ridiculously named STRANDED, SEDUCED...PREGNANT. If you're a fan of the soapy shoujo manga like Hana Yori Dango or Paradise Kiss, you'll like her work.