The Everlasting Rose by Dhonielle Clayton 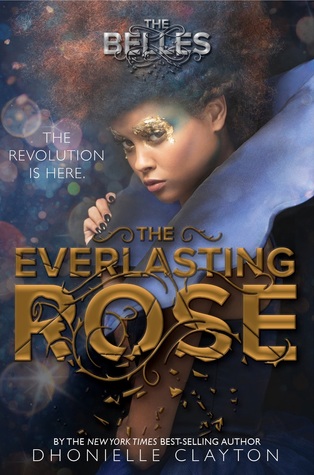 On the surface, The Belles series really doesn't seem like it should work. The concept of a dystopian society overturned by a teenage revolutionary has been done to death thanks in part to the wildly successful Hunger Games and Divergent series. The Belles, in particular, is highly reminiscent of the shallow and superficial Capitol elite in THE HUNGER GAMES, with over-the-top costumes, high premiums on beauty and luxury, and a laissez-faire attitude towards their poor and suffering populace reminiscent of the nobles in pre-Revolutionary France.

Part of what saved THE BELLES for me was how dark it was willing to be to drive home the point that beauty isn't everything. Camellia, the heroine, starts out very sheltered and naive, a pawn in her society's quest to become beautiful and adored. By the end of the book, she isn't just questing her own powers and where they came from, but also where her society's ideals fit in within larger concepts of morality and justice, and whether the ruler overseeing Orleans is really capable of fair and just rule (spoiler: nope).

Of course, this being a dystopian novel, she finds that out the hard way, through blood and tears.

The Belles series takes place in a magical/steampunk fantasy version of New Orleans called "Orleans." Society revolves entirely around beauty and luxury, and the tyrant ruler Sophia has gone literally mad with power, exerting magic and might over her subjects at will, as well as demanding constant assurance that she really is the fairest in the land. The previous book ended with Camellia being betrayed, losing favor with the queen, and being forced to go on the run, until she can lick her wounds and rally her strength to become the revolutionary figure that Orleans needs.

When I saw the cover for THE EVERLASTING ROSE, I could tell that this book was probably going to be a lot darker - and I do like the contrast of that, but I don't think that this cover is as pretty as the original. Her neck ruff is super weird - it reminds me of this line from Black Adder, in which he describes one of his Elizabethan colleagues as looking like "a bird who swallowed a plate." In a way, that's fitting for this book, because it manages to be both horrific and ungodly cheesy at times.

Since this book isn't out yet, I don't want to spoil too much. I will say that we do get the revolution we were promised from the first book, and it is handled pretty well. There's a bunch of creepy women called the Iron Ladies who really like spiders (I can't help but picture Diana Terranova). Camellia discovers that her and the other Belles's powers aren't actually limited to beauty and makeovers. Camellia gets angry, and stoops to cruel acts in the name of justice. She loses her shit. It's brilliant.

And yet, there were things in this book I didn't really enjoy. I didn't like that Ms. Clayton not only seems to be redeeming Auguste, despite his betrayal in the previous book, but also appears to be reintroducing him as a love interest. She chose Remy, dammit! I didn't like the animal death that happens in the last third of the book and, worse, is committed by the heroine herself. It felt totally pointless, like it was done for shock value and that's it. There are better ways to be edgy than to just go around killing innocent little animals, just my two cents. I also didn't like the bizarre Invasion of the Body Snatchers twist this book took towards the end. I'm not going to go into any further detail than that, because spoilers, but if you read this book, you'll know what I'm talking about. It was pretty flipping weird. At that point, it kind of felt like this book had jumped the shark.

Lastly, and I did touch on this briefly in the previous book, I don't really like that the villain is an out lesbian. Not that I don't like lesbians, but it's irritating that when you see LGBT folk represented in fiction, it's usually as 1) the bad guy, or 2) the sacrifice (i.e. bury your gays). The previous book had a character named Claudine, who was the queen's lover, and she was murdered. When I complained about the only gay character dying, people were quick to jump on that in my review, pointing out that Sophia was also gay. Yes - she's gay, and she's evil AF. Having a dead gay and a psychopathic narcissist gay as your two main examples of rep really isn't that great. I know a lot of my LGBT friends who read this book were really upset about that aspect of this book, and I can see why. Especially since this book works so hard to be inclusive with regard to rep of skin color, with several of the main characters described as being various shades of brown, and this being described as beautiful, even desirable (I loved that, by the way - one of the best moments in this book is when the heroine totally goes against shadism, saying that she loves her natural skin color, and that darker is beautiful). It just goes to show that even diverse books can be problematic in how they choose to represent diversity within the worlds that they create.

Overall, though, THE EVERLASTING ROSE wasn't a bad book. I know I always sound harsh when I review these things, but I do really make a point to be fair and discuss as many elements in the book (both positive and negative) as possible because I know some of the tropes and problematic elements I discuss in my reviews do bother people, even if they might not bother me, and I consider it my duty as a reviewer to try and present an accurate recap of my reading experience to help others decide whether or not they want to buy the book. I did enjoy THE EVERLASTING ROSE, and its over-the-top cheesiness that reminded me in so many ways of a better-written version of Amy Ewing's THE JEWEL. I thought the writing was gorgeous, and loved seeing a black heroine getting to save the world for a change. I'm really looking forward to seeing what Dhonielle Clayton comes up with next.