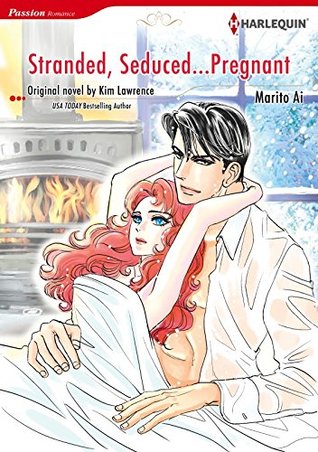 With a title like STRANDED, SEDUCED...PREGNANT, there was no way I wasn't going to read this book. What a title. I think I giggled for a solid five seconds over it, like she just happened to get stranded somewhere with a hot guy and just being in the sphere of his manly presence within such a small, enclosed space just happened to make her pregnant. Sure.

Neve is in her early twenties and when we meet her, she's in the middle of a snowstorm. Her bratty, fourteen-year-old step-daughter has run away and she's trying to find her. Instead, she finds the Godly Impregnator, AKA Severo. He takes a look at her eyes and falls in lust. She takes his car and falls in snow. Instant romance. Severo rents skis to track her down and they end up in an abandoned cabin whose front door just happens to be unlocked and there's already a fire going and everything. Turns out the couple that owned it was also pregnant and had to flee to the hospital, leaving their house to burn to the ground.

Neve and the Impregnator take off their wet, icy clothes and can't take their eyes off each other's conveniently form-fitting bedsheets. They have sex. Protected sex. They enjoy it so much, they do it again - unprotected, this time. Because apparently this manga is a game of Wheel of Fortune and R_ckl_ss St_pidity is on the board. Can I get an "e" and a "u"?

Anyway, Neve ends up pregnant and her step-daughter, who decides she likes Neve now that Neve almost died for her sins, finks on Neve to Severo. He wants to do right by her, she demurs because she's convinced that he thinks she's a Wretched Slutty Woman like his own step-mother, who is constantly coming to him for money. He feigns losing his fortune and probably freaks out all the shareholders of his business by running a fake news article claiming he's lost everything. Neve comes to him, offering her own fortune, and he's like LOLS, jk, just trying to get rid of the Wretched One.

Now he knows for sure that Neve wasn't a Wretched Slutty Woman after all, and really was telling the truth when she told him that she married her step-daughter's father to take care of her and not for his fabulous millions. They get married, and the couple whose cabin they boinked in comes to the wedding and are like, "We're so happy you screwed in our house! Our children will be friends!" Not joking, lolwut, because that's totally the reaction someone would have in this scenario, right? But then, on the other hand, there's #PlaneBae, so who knows? Maybe they totally would. Dafuque.

I liked this book, even though it was a ridiculous story. The illustrations are really nicely done and were familiar for some reason - it turns out I've read another Harlequin adaptation from this mangaka, MISTAKEN FOR A MISTRESS. MISTAKEN FOR A MISTRESS was a much better story, but this story has a much better title. I still feel like they skipped a step, kind of like the Underwear Gnomes' pyramid-like scheme for profit in Southpark. I adapted their chart. 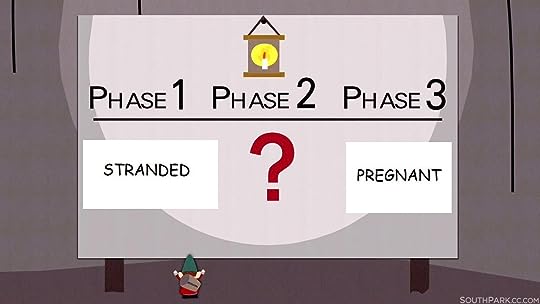 This was a fun story and had some interesting commentary on blended families, but mostly I just read it for the title expecting some serious cheese, and I was happily not disappointed.