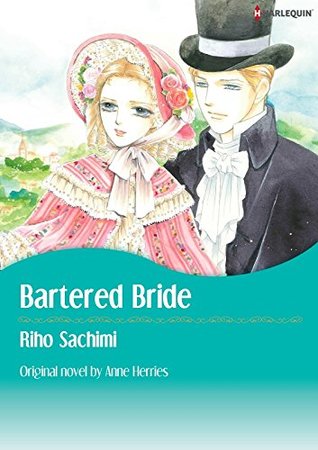 Harlequin manga are comic book adaptations of romance novels done by Japanese mangaka. They were the way that Japanese people consumed romance novels and apparently word of their existence made its way to the United States because now, suddenly, I'm seeing them on Amazon all the time. Considering how popular comic books and romance novels are here, especially among women, double-barrelling the marketing by combining them was ingenious. In fact, Harlequin manga are only truly limited in that they are only as good as the work they are adapted from. The curation process seems to be halfway decent, as most of these books are quite good, but every so often I come across one that leaves me annoyed.

BARTERED BRIDE was an exciting buy for me because it's an adaptation of one of Harlequin's historical novels. I've read several different kinds of Harlequin manga so far, but this was my first historical adaptation. Unfortunately, my feelings are pretty mixed, since I didn't really like any of the characters all that much, even though the art was lovely.

The problem is that the heroine, Charlotte, comes from a Garbage Family. Her father, Mr. Garbage, is a compulsive gambler and when he runs out of money while pitting his luck against a marquis, he just decides he'll wager one of his daughters' hands in marriage. He has two, after all. No big loss. Mr. Garbage comes home to tell his daughters the great news, but Clarice, whose hand he has wagered, tells her sister that she can do it because she met her true love in Paris, thanks. Just in case Charlotte gets any bright ideas - like saying, "No, bitch, you marry the damn jerk" - Clarice runs away, leaving Charlotte with no choice but to marry the marquis in her sister's place while her dad looks for her.

The marquis is not super thrilled with the marriage because at the gambling party (at which Clarice was in attendance), he caught Clarice pick-pocketing his guests. However, due to his Mommy Issues™, he doesn't want to fall in love with his wife anyway because love hurts too much, so he's just grateful that she's young and healthy and completely unattractive to him personality-wise. Unfortunately, he catches on pretty quick that he married the wrong sister, and unfortunately, since the papers were signed in Clarice's name and not Charlotte, that grants Clarice all the rights.

While the marquis races off to correct his error, Charlotte endears herself to the people of the march. She's learned that the marquis is also garbage and has been neglecting his people, letting them suffer by the banks of the rotten river that's overflowing its banks. She tells them that if they dam the river and do it well, she will pay them and let them keep the tools and refurbish their own homes, and she manages to do all of this with the spending money allotted to her by the marquis. This endears her to the marquis, who shares his Mommy Issues™ with her as a result. His mother died of a fever from one of their Daily Visits to the Poor™ and he never was able to get over his butthurt from that.

Anyway, sister Garbage Clarice comes back for a visit one day, and is super jealous that the man who she turned her nose up was actually a rich marquis (she didn't know that). She blackmails her sister out of the remainder of her spending money and then steals the necklace that the marquis gave Charlotte as a gift that was from his mother. When she shows up to a party without it, the marquis thinks she's hawked it when he hears of a woman holding it up to a lowlife dude in the garden outside, but nope, it's Clarice Garbage, and when Charlotte runs out there to stop her, she's like, "WHAT A SELL-OUT" and tries to have Charlotte shot, only for the marquis to intercept the bullet.

The lack of consequences for Clarice really annoyed me. I get that bad people do not always get what is coming to them, but that is not why I read fiction. Fiction is supposed to be an escape; it is an oasis of logic and predestiny in a world that seems chaotic and unpredictable. That's why I find romance novels such welcome respite, to be honest. You (usually) know you're going to get a happy ending and that the evil, villainous people will be punished or redeemed to such a point that they don't really deserve punishment anymore. But apparently the Garbage family is above such lowly treatment and get to get away with being garbage. I'm sorry, but no. I can't get on board with such trash behavior.

While I also really liked the art, the way this graphic-novel was organized made it hard to read. The mangaka tried to cram too much writing in each panel and this doesn't really work for the e-manga format. The letters - especially the more stylized letters that looked like handwriting - were all scrunched together and very hard to read. I found myself having to squint and hold my laptop closer to my face in order to properly read the dialogue. It could have been laid out much better.

Overall, my verdict for BARTERED BRIDE is not my favorite, but it was barely okay.