Fifty Things That Aren't My Fault: Essays from the Grown-Up Years by Cathy Guisewite 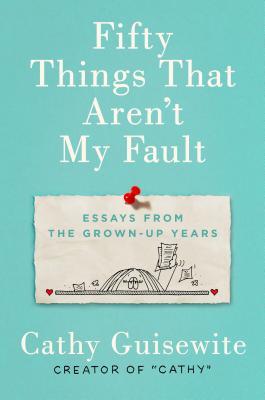 Ultimately, feminism is about empowering women and providing them with the agency to not just make their choices, but to make those choices in an environment where their opportunities for success and for failure in all domains are equal to those of other genders. People have a lot of ideas about what is and isn't feminist and often, things like the Cathy comics and books like BRIDGET JONES'S DIARY are placed firmly in the "isn't" category.

Here's the thing: while it's important to fight for what we don't have, and provide opportunities for women and normalize traditionally non-feminine careers, lifestyles, and choices for women (or those who choose to identify as women at any given time), there are a lot of women who like "girly" things. And even as we fight for change, the grim reality is that a lot of us often feel trapped or bound by the constraints of our gender norms. So yes, even though we shouldn't stress about fitting into a size 12, or obsess over the jerks who don't call us after three days, we do.

Part of what I've always enjoyed about BRIDGET JONES'S DIARY and the Cathy comics is that these stories normalize the struggles of what it's like to be a woman in society, trying - and often failing - to play by society's rules for women while also sort of thumbing their noses at them, in an, "Oh, I'm stressed, you're stressed, but it's okay" way. Even as a high school student, there was a lot to relate to in Cathy. I think a lot of women felt the same way, especially since the Cathy comics were being published at a time when there really weren't a lot of comic strips specifically aimed at young-to-middle-aged women struggling to make it.

The strips were in syndication for over thirty years, until the creator, Cathy Guisewite, retired about a decade ago. When I saw an ARC for her memoir was available, I grabbed at it, because I'm super nosy and I love seeing what my favorite creators or celebrities are up to when they're not in the limelight (I don't know what you'd call the off-screen time - orangelight? pineapplelight?). I want to see them in the pineapplelight. And this memoir seemed like the perfect pineapplelight.

FIFTY THINGS THAT AREN'T MY FAULT serves as a kind of "where is she now?" expose on the Cathy creator, post-retirement. Now in middle age, she is a full time mother to a college-age daughter who no longer needs her, and a full time caretaker to nonagenarian parents who do not want her help. While fretting over family, aging, and health, Guisewite also goes back to basics with essays on the frustrations of having an entire closet of jeans that don't fit, and the sheer ridiculousness of the weight put on women's appearances to the point that we have to do different makeup for all sorts of different events and have fifty different variations on a white shirt, whereas men can just show up, clean-faced.

People who pick up this memoir looking for comedy are going to be disappointed, however. The humor here is much darker and sadder than in the Cathy comics, and there's a bitterness here that has replaced the jaded hopefulness of the Cathy comics. It also dishes out some pretty hardcore Truth Sandwiches™ alongside some tall glasses of Suck It Up Buttercup Fizzy Cola™, so beware.

P.S. There are fun doodles in the chapter headings and paragraph breaks.