The Dimitrakos Proposition by Ayumu Aso 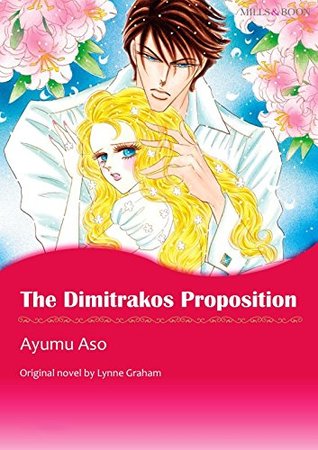 Remember the stupid and thankfully short-lived Kylie Jenner Lip Challenge? That dude on the cover looks like he totally decided to go for it. That dude on the cover is our "hero," Acheron Dimitrakos, and he is an asshole. Assholes come in many flavors, like the ice creams at Baskin Robbins, but Acheron is the variety of asshole that gets visits from three ghosts at Christmastime. There's the delightfully amusing asshole, and then there's the whiny little rich boy who makes stupid and petty decisions because he's so ~damaged~.

Guess which one he is?

Tabby is a poor young woman living paycheck to paycheck with a child that isn't even hers. She was appointed the guardian of the baby by someone she knew, and the rich millionaire, Acheron Dimitrakos, was co-guardian - although he refused the post, because #NotAllMen. Now Child Protective Services is on the verge of taking the child away because Tabby doesn't have the resources and she's going to plead for his intervention.

Tabby, however, is sexy and a ~virgin~ and Acheron reacts to this like she's a new and unusual vintage of expensive wine that he simply must sample. Sexual tension ensues, they do it, and then he leaves right after because Acheron Grey doesn't cuddle, he fucks - hard. (Oh, wait, I think I'm confusing my d-bag billionaires.) Then Tabby is almost murdered by the stepdaughter in a hit and run (who wants in Acheron's pants), but she kills herself by driving into a wall. It's revealed that the stepdaughter has an unspecified ~mental illness~, probably that old fan favorite, deus ex ablesism.

I was not a fan of this manga. I thought Acheron was a jerk and the heroine was a ninny who cried all the time. I also thought the art was really ugly. Acheron's lips were so pouty, they took up like a third of his face, and the way Tabby was drawn it was like she was done in a totally different manga style. I'm glad I got this on sale, because if I had paid full price, I would have been terribly disappointed.