Her Impossible Boss by Yoshiko Hanatsu 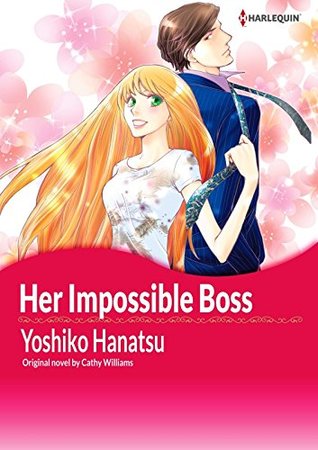 I'm a huge fan of romance novels but I'm very picky about what genres I'll read. I mostly read historical romances and dark romances, with the occasional new adult college romance if it seems like it's going to be smartly written. I don't actually read that many adult contemporary romances. Most Harlequin manga are adaptations of contemporary romances, so it's interesting for me to see what types of romance scenarios seem to be really popular. For example, I had no idea how popular nanny romances were until I started reading these manga.

HER IMPOSSIBLE BOSS actually reminds me a lot of another nanny-themed romance I read recently called THE SUBSTITUTE WIFE. Like THE SUBSTITUTE WIFE, HER IMPOSSIBLE BOSS is about a young, ditzy, manic pixie dream girl who is desperate for a job she isn't really qualified for. The man in question in both books just had his wife die, and without a woman's hand, he is totally lost and incapable of taking care of his kids, so he becomes an asshole workaholic.

Tess, the heroine of this book, is the younger sister of one of Matt's employees, although when he meets her he's slightly horrified that she's only got a high school diploma and dresses like a kid. He hires her out of desperation to take care of his daughter Samantha, and is shocked when they hit it off right away. Samantha has a long list of needs and demands that he's never bothered to find out about, and pretty soon Tess has them doing board game nights or going out to see sports games.

Matt invites his girlfriend out on one of these trips in an attempt to put distance between Tess and himself, but it backfires when he realizes how much he prefers Tess. He breaks things off with his girlfriend and his relationship with Tess turns sexual but oh no, the first time is the unprotected time, so you can imagine what happens. You can also imagine what happens when Matt acts like he's doing Tess a huge favor by proposing, after telling her he doesn't want to be married & accusing her of doing it as a ploy to get her hands on all of his fabulous money. Bad move, Matt. Bad move.

The last act conflict in this book was much better than the drama in THE SUBSTITUTE WIFE. I also liked Matt better. He was just a big fat idiot, whereas Jay in the other book was kind of sexist. I think the dead wife trope is a cheap way to get the previous woman out of the picture w/o conflict, but I get that a lot of women reading these probably don't want to have a jealous or angry ex-wife in the picture, especially with a kid involved. A rich and incompetent widower is probably the ultimate fantasy for a lot of women, especially if it means a stepdaughter who's crazy about them.

HER IMPOSSIBLE BOSS really wasn't a bad book. I'm not a huge fan of nanny romances or manic pixie dream girls, but the romance in this book was okay and I did enjoy it anyway. The art style is pretty simple but pleasant, and it's consistent which is nice (I recently read one of these books where the character models kept seeming to change). Is this one of my favorites? No. Does it take a tired concept and do an okay job with it while keeping the characters sympathetic? Yes. Not bad.