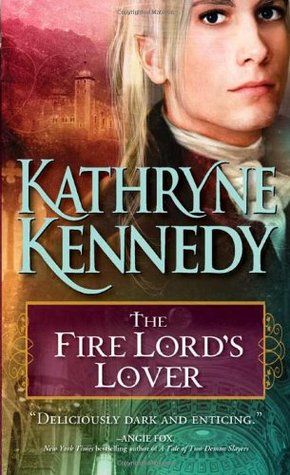 They say you shouldn't judge a book by its cover, and that's definitely the case with this charming little monstrosity. While the cover looks like an exercise in What Not to Do in Photoshop 101, the story inside is 100% delightful. I mean, I'm a little biased - it opens up with a woman who has the ability to do magic dances (dance magic dance) who is engaged to be married to a hot elf guy who has power over fire, and their wedding is basically that ballroom scene from Labyrinth. In fact, now that I look at the cover, I think the artist(s) were even trying to channel a bit of David Bowie as Jareth (even the waistcoat/cravat kind of look the same).

I mean, they failed, obviously. But A+ for effort.

THE FIRE LORD'S LOVER is set in alternate universe Georgian England. Elves with various magical abilities have come to England (and presumably elsewhere) from Elfhame and carved out territories in England. The hero, Dominic, is the son of the Imperial Lord of Fire, and his father is a mean son of a bitch. Dominic is half-human and his father lords this over him constantly, torturing him on the reg and subjecting him to all kinds of physical and psychological abuse to make him cold and inhuman.

The heroine, Cassandra, also has elf-blood, as all humans with magical powers in this world do, but hers is the ability to dance. In particular, she can do something called a "death dance" which is basically Footloose, only it ends in murder instead of Kenny Loggins. She is marrying Dominic as part of the rebellion against the Elvish tyranny, to get close to and then murder Dominic's dad. She was trained in secret in a nunnery by another magic dancer masquerading as a priest. Being so attracted to Dominic throws a wrench in her plans, though. Especially since, in the typical "I hurt you for your own good" Male Issues™ fashion, Dominic pretends he wants nothing to do with her emotionally. And once he does let her in, it's highly unlikely he'll let her proceed as planned.

I was expecting this book to be cheesy but it's actually rich in political intrigue, has thoughtful world-building, a great magic system, wonderful secondary and tertiary characters, a fantastic love story, and hot AF sex scenes. There's also a twist in this book that is about 1,000 times darker than I was expecting, but then there's a lot of dark moments in this book that that goofy cover would leave you woefully unprepared for. Dominic tries to keep his wife at arm's length because his father has a habit of killing everyone he loves and his only companion in the world is the dragon that lives on their roof. Even when he flaunts his mistress in Cassandra's face, it's easy to forgive him because he's really trying to keep his wife safe by pretending to be icy and indifferent and cold.

This book needs a rerelease and a cover change, because it is awesome.