The Grandmaster: Magnus Carlsen and the Match That Made Chess Great Again by Brin-Johnathan Butler 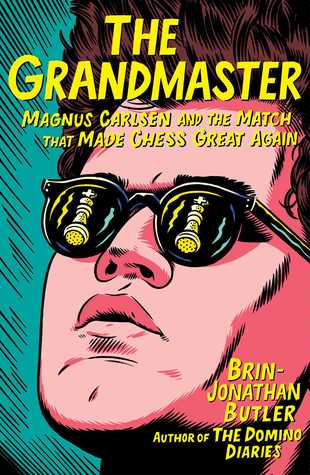 As a player of chess, I can't help myself when I see a book about chess. I have to read it. Sometimes, the results are awesome, like David Shenk's THE IMMORTAL GAME. Other times, the results are disappointing, like QUEEN OF KATWE. I'm sorry to say that despite its intriguing cover art, THE GRANDMASTER falls into the latter group. I read this book and was very disappointed.

The first warning sign comes at the beginning, with a random tangent about Donald Trump. I guess because Carlsen's match against Karjakin was overshadowed by protests against Trump's election and apparently Carlsen is a fan of Trump. According to this book, Carlsen likes him because, like him, Trump is good at finding people's weaknesses (ick). In fact, to cheekily show his support of that orange rat fink SOB, he played the Trompowsky Attack as a show of solidarity. How adorable.

Aside from turning me off Magnus Carlsen completely, this book failed to provide much insight into Carlsen or his games because the author keeps going on tangents. Tangents that aren't necessarily accurate. For example, he talks about how poorly compensated chess players are, but with things like Twitch (online streaming site for games, popular with online chess sites like chess.com or lichess.org) and the rise of influencer culture, I'm not sure that's true anymore. With social media being what it is, it is much, much easier for those in niche areas to reach out to like-minded fans.

Second, the author says that in order to understand Magnus Carlsen, it's important to research Bobby Fischer, and then goes on a tangent about chess and mental illness. Which, again, had me giving this book the ol' side-eye because 1) apart from being jerks who apparently like making their opponents squirm, Fischer and Carlsen really don't seem to have that much in common. They are two very different people coming from two very different walks of life. And 2) correlation does not prove causation. Once you get into any highly competitive arena of hobbies or sports, you're going to find dysfunctional people who take their obsession too far. That does not mean that the thing in question is responsible for these behaviors; it's self-selection on the part of the people focused on these activities.

Third, several times the author mentions the lack of women in chess, and seems focused especially on Judit Polgar. It's true that Judit Polgar has the highest peak rating of any woman, but she is by no means the only female grandmaster out there, nor is she the only recently active one. In fact, she's no longer even the youngest female grandmaster; that honor now goes to China's Hou Yifan.

Fourth, the author seems to think that Carlsen is special because he hobnobs with celebrities and - gasp - has a six-pack. A chess-player who isn't a total uggo? What a shock! I find that incredibly rude, like the author is buying into the "chess players are socially dysfunctional freaks" stereotype, especially with the focus on chess as being related to or causing mental illness portion of the book. One, I find it insulting that Carlsen deserves more recognition simply because he's done modeling - and even if that were the case (which it's not), two, he's not the only one. Alexandra Kosteniuk, for example, is a female grandmaster and a model (and one of my personal favorite chess players).

Fifth, when giving a brief background on Carlsen and where he comes from, Butler talks about how the town Carlsen comes from is (in)famous for two things: a Medieval festival and a concentration camp that was entirely Norwegian-owned and operated. That kind of made me feel icky inside, because I know a lot of people from Europe feel terribly about WWII, and putting this odd and irrelevant fact in the book felt (1) like padding and (2) kind of insensitive and disrespectful.

This book was kind of all over the place and wasn't very helpful. I'm guessing it was rushed to the press so its release date would coincide with Caruana and Carlsen's current match in the World Chess Championship games (happening right now - literally all anyone is talking about on lichess at the moment). That was a clever marketing move, but THE GRANDMASTER itself is anything but.