Bringing Home the Birkin: My Life in Hot Pursuit of the World's Most Coveted Handbag by Michael Tonello 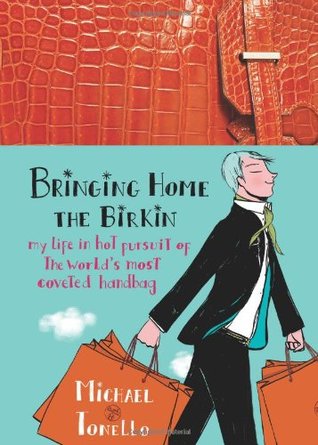 This was gossipy and fun, and proof that someone doesn't have to seem "likable" to write a good memoir. Michael Tonello made a living for a while as a "reseller" of the rare Birkin bags, named after Jane Birkin and coveted by highly materialistic, conspicuous consumers everywhere. During one year, he spent $1,600,000 on Hermes merchandise for resale. That's more money than most of us will ever see at once, and it's ridiculous to imagine it going towards handbags and scarves. I consider a scarf over $25 to be expensive, so you can imagine how much my eyes bugged out as I contemplated these prices. Jeez! The most I've ever paid for a bag was ~$145 and it was Kate Spade.

Michael Tonello reads like a Sex and the City character, or one of the catty flamboyant BFFs that populate chick-lit novels everywhere. This is a guy who enjoys judging people, and has it down to an art form, and considers an $800 tab with a colleague a good investment. I think he'd relish the Sex and the City comparison, to be honest; he seems to feel very comfortable with who he is, even if who he is sometimes means "politically incorrect" or "jerk," and is utterly unapologetic about his privileged and expensive lifestyle. There's some very off-color remarks in here, and he has put together a rather judgemental guide based on his perceptions of the walking stereotypes who work at many Hermes branches. It's hilarious AF, though, and pretty on-point based on what I've seen at some luxury stores' service.

I liked this book because it was very readable and it was interesting to see how he gamed the system. He perfected a "formula" for getting a Birkin when many people were either turned down or put on endless waitlists. You can't help but root for the underdog going against Big Corporate; in a way, it's as much of a guilty pleasure to watch as Oobah Butler faking his way to Paris Fashion Week with a pair of jeans he bought at a street market. There's also occasional moments of drama - hiring "thugs" to deal with a sketchy ex-colleague, fights with his boyfriend about money, dealing with snooty salespeople who won't fork over handbags - which add a nice bit of tension to the narrative.

The last chapter was rather jarring considering the tone of the memoir to this point, but I do agree with his point ultimately: the hustle life is a tough and unforgiving one. Initially, he enjoyed the thrill of the chase, but I think his mother's failing health and getting screwed over by that Luc guy put his "work" into perspective. I liked his decision at the end, and appreciated his outlook. He met a lot of really interesting characters (one of whom had him drive her Aston Marton to her second home as a favor) and had some of the most luxurious items in the world flow through his hands. As he said in the last chapter, he has some good stories to tell over ouzo now.