Sleep In The Woods by Dorothy Eden 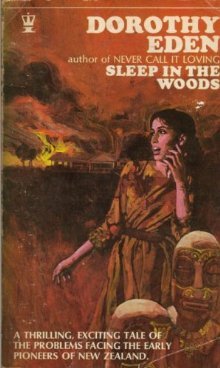 Maybe if I had forced myself to slog through the remaining 53% I might have found it in me to award this book an extra star. But I couldn't really muster the enthusiasm. I really enjoyed the other book I read by this author, a Gothic called DARKWATER. The premise of SLEEP IN THE WOODS sounded even more intriguing.

Briar is the servant of two wealthy girls seeking husbands. They go to New Zealand to find their matches, bringing Briar with them, living with their aunt. Briar is very ambitious and strives to catch the attention with one of the local boys, but instead, at a masquerade (because #MistakenIdentity!), she ends up in the arms of the dangerous and very wealthy Saul.

Thus compromised, Saul has no choice but to marry her and take her to his home in the heart of Maori country, where the local indigenous peoples are portrayed as ruthless, violent cannibals.

I wanted to like this book. I love Gothic novels, and even though this is as un-PC as all get-out (reminiscent, in a way, of that exploitation film Cannibal Ferox), I am willing to tolerate un-PC content if it a) suits a purpose, b) suits the times, and c) doesn't involve children or animals. But I can't stomach a book that is boring. And boring this book was.

Sorry to give this a bad review, but that's how it goes.