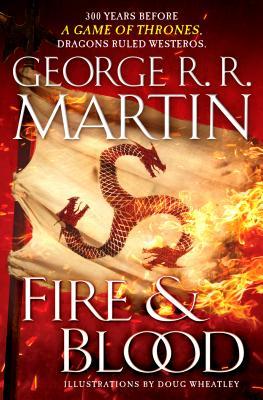 WARNING: This book is NOT a novel. It is written like a history book with no dialogue, and everything is all tell and no show.

If you look at the reviews for this book, most of the reviews aren't about the book at all. 90% of the ones I glanced at were fans literally fighting with each other over how entitled they are to take the piss out of George R. R. Martin for publishing Targaryen fanfiction instead of WINDS OF WINTER. And as both an author and a reader, I get it. As a reader, I've spent years, years, waiting for sequels to books I have enjoyed, only to sometimes see that the sequels are cancelled or eternally postponed after the author loses interest or the publisher does because it was a bust. And as a writer, I've also felt the frustration of being told to write sequels for books I have no time or inspiration to write (although my fan base is in the thousands and his is in the millions, and I'm not a full-time author, nor can I afford to be). There are always two sides to every issue, but I can definitely understand how his fans might be annoyed and betrayed when, after waiting years for WINDS OF WINTER, Martin comes out with a 600-plus page tome that's mostly irrelevant to the main story, even though it's set in the same world. Yeah, I'd probably be mad, too. In fact, I am mad - but for different reasons.

In terms of the Game of Thrones fandom, I am a dilettante at best and utterly disinterested at worst. I've read the first two books in the series and they were okay. The parallels to the War of the Roses and politics are probably the best thing about them, as I found the writing subpar, and it appears to degrade as the books go on. In my review of the first book, A GAME OF THRONES, I write about the similarities the series has to many historical bodice-rippers of the 70s and 80s, and talk about the irony of how some of the book's staunchest fans are the same people who also frequently condemn romance novels and the "females" who read them, despite the fact that many of the OG bodice-rippers featured brutal heroes, a morally ambiguous cast of characters, and all kinds of physical and sexual violence, usually for revenge or for a political coup, but sometimes just to be a d*ck. I continue on that theme in my review of A CLASH OF KINGS, and then I got bored with the series.

Part of the reason I wanted to read FIRE & BLOOD was because Daenerys Targaryen was my favorite character in the series. She also gets to go on the coolest adventures and she has three flipping dragons that she rides around like a BAMF. For a fantasy series that really doesn't have that much magic in it, this was a huge draw for me, a fan of the OG swords and sorcery brand of fantasy. Did I want to read more of the Targaryens and their dragons? Of course. So as soon as this book popped up on my radar a while back, I added it to my to-read list despite being done with the series because I was curious to read about the crazy, power-mad Targaryens and their hotbed of dragons and incest that could make even a Lanister blush. They always seemed like the most interesting House.

Now that I've tried to actually read FIRE & BLOOD, I am disappointed. This book basically does what the SILMARILLION did for the Lord of the Rings series. It isn't a novel. It's written as nonfiction, with a pretentious AF index in the front of timelines, divided into tedious accounts of marriages and battles. It is NOT a novel, as I stated in my disclaimer at the top - at least, not a novel in the traditional sense. No, this is a novel masquerading as that dry history textbook that cost you $500 in college. You know the one that was so old, it was fabric bound and smelled of mildew? Yeah. And while the concept is interesting and I found myself reading further than I wanted to, it isn't sustainable. Not for 600+ pages. It's such a boring book, I couldn't believe that it would continue on in this vein for 600+ pages. So I skimmed ahead, looking for normal dialogue and narrative descriptions and - nope. It literally continues on in this manner for the full book.

And lest you be suckered in by the promise of ILLUSTRATIONS on the cover, those aren't that impressive either. The artist isn't bad... but his art style isn't exactly attractive. Considering Martin's immense popularity, you'd have thought that he could have found an artist to bring the characters to life in a way that the book might be worth buying for the art alone. But no. There's better artwork to be had in the Official Game of Thrones Adult Coloring Book.