Introvert Doodles: An Illustrated Look at Introvert Life in an Extrovert World by Maureen "Marzi" Wilson 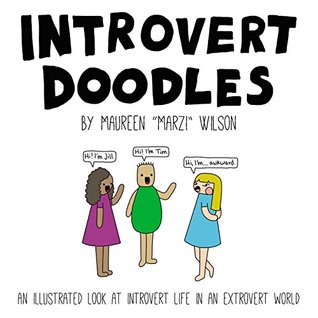 I got this from a co-worker and I'm not sure how I feel about it. On the one hand, I think the author's drawing style is really cute, in the same vein of simplified yet charming styles as artists like Sarah Andersen and Allie Brosh. On the other hand, I'm really freaking sick of the stereotypes of introverts being rude and dysfunctional AF and how people try to portray such antisocial behavior as being "cute" and "unique." I'm saying this as an introvert, FYI, because I've had people come onto my reviews where I make similar complaints and say, "YOU DON'T UNDERSTAND." Shut up, please, because, yes, I do. Because I used to be like that - when I was a teenager, I had social phobia (different from introversion) and being around people would freak me out. The idea of ordering something from a cashier was something that would give me anxiety, and school reports used to make me feel physically ill. I am also an introvert but those are two separate things. Social phobia can be, and probably should be, treated, because social interactions are an integral part of how we function in society. Introversion, however, is just the way somebody's brain is wired, and an element of one's personality. I'm an introvert but now I love to go to parties and give speeches and other things that used to make me want to dive under the nearest table, but afterwards, I need alone time to recharge. I'm happy being alone, but also enjoy spending time with others. I just prefer "low-key."

My point is that a lot of these #IntrovertLifeForever artists lump things like social phobia and anxiety in with introversion, and I don't appreciate that because 1. it makes introversion seem like it's a mental health disorder (which it's not, although I am sure that such connections may exist in some people), and 2. these books frequently make fun of extroverts and portray them in a very negative light. Introversion is not a mental health disorder, and it does not mean that you are rude or afraid of dealing with people. It simply means that social situations deplete you faster and that you need to spend a lot of alone time to recharge. In one of my psychology classes, we learned that this is because people who are introverted have higher stimulation thresholds (I think it was for dopamine), so they get overwhelmed faster than people with lower stimulation thresholds (i.e. introverts), who need more stimulation to get that same rush, and actually feel pretty crummy without all that engagement. And while I am all for normalizing mental health disorders, I don't think it's good to say that the negative behaviors that come from some of these are totally acceptable and okay. Some of the behaviors in this book were not functional, and normalizing that behavior (separate from the individual, mind you), in my opinion, is problematic. I also don't really get the "us vs. them" mentality of introverts vs. extroverts. Again, some extroverts exhibit problematic behaviors but that's not usually a direct result of extroversion. I love my extrovert friends because they often encourage me to do things that are outside of my comfort zone that I may end up loving, like going on roller-coasters, trying out a new bar outside of my routine area, or entering a baking competition (all real examples, BTW). Do they sometimes overwhelm and annoy me? Yes. But do I resent them for it or think that they are bad people? No. That's just the way they are, and I can always just say, "No," if I don't feel like going on their latest madcap extrovert adventure. "Ten people, ten colors," as the Japanese say.

INTROVERT DOODLES falls into the trap of relying on stereotypes to portray introverts and extroverts. Some of the cartoons felt true - for example, the one about needing to recharge after a party and being secretly thrilled when plans get cancelled both hit home for me, and being stressed out about answering the phone - but others, like being mean and sarcastic to people who wanted to go out with her, throwing a temper tantrum about an office party, and acting like a mega-jerk to clueless extroverts rubbed me the wrong way.  When my co-worker gave me this book, she said, "She's very grumpy," and I think that's a pretty accurate summation of the book. I wish introvert comics weren't written this way. We can be pleasant, sociable people, and some of us might get mistaken for extroverts (I do); we just need to recharge afterwards, and feel more comfortable when we're alone or in a small group. I'm tired of the stereotype of introverts being dysfunctional, rude, and self-centered people who do very irrational and nasty things when put into social situations. It's very uncomfortable and I think it gives people the wrong idea about introverts. :(