The Necromancer's Bride by Brianna Hale 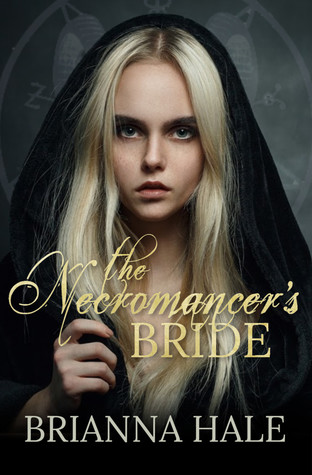 I've been really into The Chilling Adventures of Sabrina lately, and when I saw this cover pop into my feed on Goodreads, I was struck by the resemblance of the girl on the front of it to Kiernan Shipka. Especially since it purported to be a dark romance involving the occult. As Sabrina would say, "Praise Satan!"

I seem to have a tepid love-hate relationship with Brianna Hale's work. The first book of hers I read was MIDNIGHT HUNTER, which received a lot of push-back from the romance community because the love interest was a Stasi officer. I thought she handled the subject pretty respectfully and actually really liked the romance and historical elements, and bought her other book, SOFT LIMITS, which was a romance between a stage actor famous for playing villains (think a young Jeremy Irons) and the young woman writing his biography. Both of those books became instant faves and I sang their praises to the high heavens.

And then... the author gave me an ARC of her book, THE PROTEGE, and I really did not like it.

You know that feeling you get when you didn't like a book that you completely, 100% expected to like? Imagine that, and then imagine that the person you wrote it is someone you are friendly with and respect a lot. I almost didn't post the review, but I felt like that would have been almost as dishonest as giving the book false praise. So, with reluctance, I posted my critical review.

I still wanted to read her other books, though, and was excited about her new one, COME TO DADDY. You can imagine my surprise when I saw THE NECROMANCER'S BRIDE turn up like a bad penny in my feed, with its Kiernan Shipka-lookalike gracing the front cover. Oh, yes, I thought. A dark fantasy romance about a sexy necromancer? I was getting Naomi Novik vibes, only X-rated. And I think we can all agree that the idea of a pornographic UPROOTED is what the world needs.

The beginning starts off strong. The heroine is a child at her deathbed when we first encounter her. Their town is downriver from a place called "the capital" that is apparently full of magic, and this magic is as toxic as nuclear waste or lead (*cough* Flint's been without water for 1,657 days now, right? *cough*), and as with such crisis in this world, nobody cares because they're poor, so periodically children sicken and die from magic poisoning. But the heroine's parents have managed to get the help of the elusive local necromancer, who places his mark upon her as payment.

But my favorite scene is at the end. You see, the necromancer is under a curse that keeps him from getting it up (so when they do butt stuff, he has his pet lich, which is basically an undead flesh zombie, bang her instead) because he was cursed by a spurned lover. So at the end, when the heroine returns to him and kisses him with true love's kiss, his "drooping rose" blossoms, IYKWIM. You know, just like in Beauty and the Beast. I bet you didn't know that the rose symbolized dick.

I don't know if this was supposed to be hilarious, but I found it wildly entertaining. It is nothing like her other books, and I can't help but feel like this was Hale's "trick" for the quintessential question of whether one ought to trick or to treat. My only complaint is that this book would have been better to save for April 1st than Halloween. What a truly epic prank to play, making you readers think they'd get fantasy daddy kink, only to surprise them with dildo leeches and vibrating magic splooge. I'm sorry, I can't right now. This was A+ trolling.