The Other Sister by Sarah Zettel 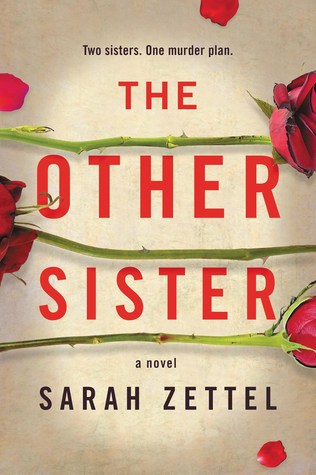 Gillian Flynn is the yardstick by which I judge all thrillers involving family secrets and lies, and THE OTHER SISTER fits that niche perfectly. It's been a while since I read a book about people so horrendously disturbed and unlikable, so horribly flawed. By the time I realized that this rabbit hole was taking me somewhere I might not fully want to go, it was already too late to turn back. So, bravely, I read on with my fingers crossed.

Geraldine and Marie are sisters. They have a close relationship but it's fraught with tension. Geraldine has always been the "bad" girl in the family - she has attempted suicide, been addicted to drugs ... and she might even be a murderer. Marie, on the other hand, is the "good" girl with the dutiful son and the apple of her ambitious father's eye; she's quick to obey, and that's what he likes. Their father, Martin, has always been about control.

As you read on, you learn more about this family, and how the father has been slowly acquiring property in their town - including that of his relatives - like it's his own Manifest Destiny. You'll learn about what happens to love when it's been poisoned by hate, and just how long grudges can last. And perhaps most frighteningly: you'll learn about the sharpened blades that wait at the bottom when you fall from the tower of your own ambition.

This terrifying family drama is juxtaposed against Geraldine's scholarly articles about fairytales, and fairytale motifs. It's fitting considering how bad the parents in fairytales were, and how children in those tales were often at the mercy of horrendous adults who used and abused them. There's an almost-magical element to the telling of this story that's reminiscent of the original V.C Andrews books (not the ones by Andrew Neiderman), and that charmed and horrified me in equal measure.

I really enjoyed this book a lot. It's a bit slow to get into and the writing style is a bit affected, but the story and the characters are gruesome, and I really think that if you're into Gillian Flynn and have been asking yourself, "What's next?" this book is probably your best bet.