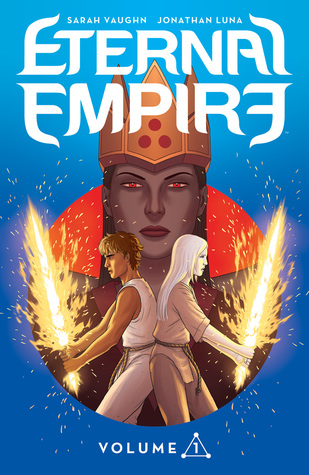 What did I just read? I've enjoyed Sarah Vaughn's other works and was really keen on seeing her interpretation of a fantasy novel. Sadly, this was so derivative: 1 part Star Wars, 1 part Avatar: Last Airbender, 1 part creepy fanfiction where Daenerys Targaryen has sex with her dragons. What, dragon sex? you ask. Oh, yes. The hero and heroine in this book have super powers because one of their ancestors got down and dirty with a dragon. Boom-chicka-wow, I so did not need to know that.

Tair is a slave in the coldest part of the Empire and Rion is a slave from the hottest part of the empire. The book is told in three parts, and parts one and two are both about each character's escape - which unfortunately is boring because both of their escapes are very similar and a lot of the dialogue is literally just panting from exertion. Part three is where the interesting stuff finally starts to happen, by which I mean the showstopper we all came here for: MAGIC. But just when the story finally seems like it might start picking up steam, it ends. On a cliffhanger. Of course.

ETERNAL EMPIRE falls into the classic trap of bad fantasy: it acts like we should care about these characters we have only just met and have no reason to be otherwise invested in. All we know about Rion and Tair is that they are slaves working in hellish conditions and they both have special eyes. Re the hellish conditions: yeah, that sucks, but why should we care about them more than any of the others? Especially the ones that, oh, you know, died or lost limbs. And the special eyes and special powers stuff totally came out of left field. Without proper foreshadowing, it feels very Mary Sue-ish.

I also didn't like the art. It falls into uncanny valley territory and looks very amateurish, like something you might see done on MS Paint. When I initially saw the rating for this book, I felt bad and wanted to like it so I could boost the rating for what I hoped was a misunderstood work, but no. The reviewers were right on the mark with this one. ETERNAL EMPIRE is bad.