Tinsel: A Search for America's Christmas Present by Hank Stuever 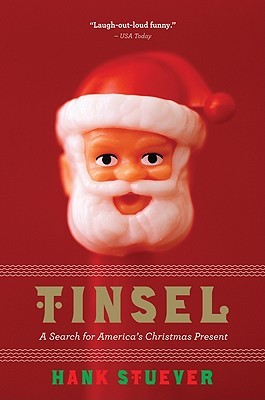 Christmas is one of those polarizing things, like the Kardashians and pumpkin spice, that people are either obsessed with or can't stand. There. Is. Literally. No. In-between. With this in mind, in 2006, Hank Stuever decided to go to Frisco, Texas to observe the locals for several months as the holiday season rapidly approached, and recorded everything that he observed while also primarily following 3-4 different families who would tell you that they f*cking loved Christmas if it wouldn't get them a mouthful of juniper-scented soap from Bath and Body Works, first.

Frisco is interesting because it's a region of the country that probably considers itself folksy and down-to-earth, and yet, the burgeoning middle-class is filled with conspicuous consumers who want all the latest in tech (even if said tech is produced by us liberals they hate so much) even as they go to craft fairs for fruit-strewn wreaths and come up with alternative facts about candy canes, such as the fact that they are actually "J"s for "Jesus."

I saw a few people, who are obviously conservative and obviously took issue with some of the author's snide observations, rating this book negatively because they took issue with the politics of the book. That's fair, I guess. The author is liberal - and I think he said that he was also gay. So obviously, going to Texas is going to be an odd experience for him, for a multitude of reasons. Keep in mind, this was in the middle of the Bush administration/Iraq War, and pre-gay marriage legalization, so politics definitely was a huge thing on many people's minds, and it would be inaccurate reporting to omit how this shapes Texans' ethics/lifestyle.

The three main families in this book are Tammie, a professional Christmas decorator; Jeff and Bridgette, people who go full-out Clark Griswold with their lights; and Caroll, devout worshipper at an actual megachurch who worries about being a good christian and taking care of her fam. Does the author sneer a little at these humble people he's writing about? Yes, a little. But I don't think he was cruel. And honestly, some of the things in this book are so ridiculous that it's hard not to roll your eyes. As someone who is neither conservative nor religious, it was so interesting to see this snapshot in time from the "other" perspective. You have people who are so like you in some ways, and yet so unlike you in others - and for some reason, it's the ways that they aren't like you that end up seeming so much bigger and more important, because those drive the choices that make them so annoying.

Part of what I loved about TINSEL is that the author did such a good job showing both the good and the bad parts of what it means to be an upper-middle-class Texan at Christmas. It was obvious by the end of the book how much he had grown to care about the participants in these little microhistories, and how much they had grown to care for him as well. Reading about all these familiar parts of my own teenage years - Converse, Natasha Bedingfield, Icing by Claire's - interspersed with emotionally manipulative radio shows peddling tragedy to sell Jesus and women who consider Sarah Palin their honorary BFF and would sell their soul to decorate Barbara Bush's house... well, it's surreal.