My Love, My Enemy by Jan Cox Speas 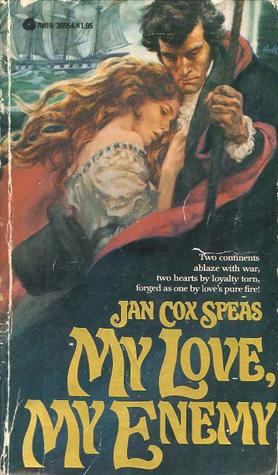 My favorite type of book to review is vintage romance novels. And since a lot of these babies are being re-released on Kindle, what used to be a frustrating and time-consuming hobby has been made vastly easier. Take MY LOVE, MY ENEMY by Jan Cox Speas, a classic romance that, until just a few years ago, used to be out of print. Copies were expensive. Tears of frustration were shed. Then Sourcebooks Casablanca said, "I got you, boo," and suddenly, we were all back in business, for the small price of ninety-nine cents.

MY LOVE, MY ENEMY is set during the War of 1812. Our heroine is named Page and she is kind of an idiot in the way that only teenagers can be idiots. The British are blockading the bay, and she decides to hop aboard a ship and go shopping. Things happen, and she ends up saving a British man from being lynched, only to come across him yet again when their ship is taken prisoner by the British and she finds out her savior is one of the evil noblemen that her country only just finished rebelling against during that nasty Revolution - oh, and he's also a spy.

I'm a sucker for a well done nautical romp and this one was done really well. The scenes and descriptions were very well done, and Jan Cox Speas has a delicious way with words that manages to be evocative without being heavy-handed. Some of her descriptions of people - especially the hero - were utterly swoon-worthy. I'm not just surprised that this romance was out of print, I'm surprised they didn't put it back in print sooner. It's slow burn, clean, and action-packed, so it will appeal to virtually anyone, and there's no rapey scenes or overt racism (at least none that caught my eye).

So why not four or five stars? It's a short book but it feels long, and that's because the pacing is uneven. The scenes on the high seas or involving the hero? Whoosh. The scenes when Page is being ferried around, and alternately bemoaning about how much she misses home and how these moments on the boat as a "captive" are the happiest days of her life (oh, Page...)? Draaaaag. I found myself skimming at times, which I didn't really want to do, because the writing was good.

I did like MY LOVE, MY ENEMY, though, and I can think of several Goodreads friends who will love this book more than I did. One point of frustration: at the end, it contains a teaser for BRIDE OF THE MACHUGH, her most popular book, coming soon for re-release. But if you click the Sourcebooks Casablanca edition for this book on Goodreads, Amazon says it's out of print. *cries*