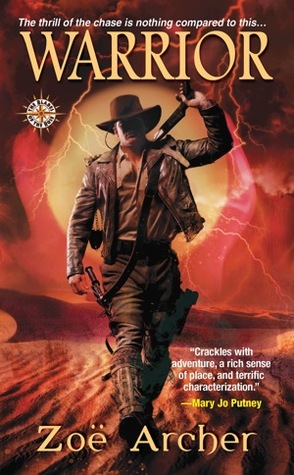 I am so angry at this book for not being good. I spent $2.99 on the four-book bundle when it went on sale, which was a great deal- but also a risk, because then if you end up not liking the series, you're out four books instead of just one. But oh, my God. It's set in Mongolia, and is like Indiana Jones meets Warehouse 13. I was totally predisposed to like this book, but I couldn't stand it. UGH.

Something about the writing in this book just feels very low quality. The sex scenes were awful - truly awful. I think it's going for a steampunk/Western vibe, but it didn't really strike the right balance, and the language was much too modern to feel authentic. Also, insta-love, you old bastard. I thought I told you never to darken my hallways again, and yet here you are, loafing around like you own the place. I'd like at least a semblance of some romantic tension.

It's a shame because the concept - a secret society who defends magically-infused objects called Sources from evil people - was great, and very much in line with some of my favorite movies like The Mummy and the Indiana Jones series (minus Crystal Skulls because that was the Jar Jar Binks of the Indiana Jones series). And this book was the Jar Jar Binks of the steampunk romances I've read: lame, cringey, and oblivious.