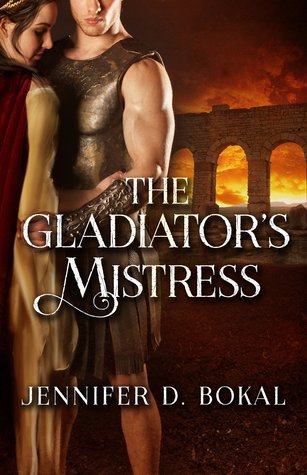 I enjoyed this a lot more than I thought I would. I mostly bought it because I'm obsessed with Ancient Rome, and the ebook is ridiculously cheap ($1.49). It's a short book, and until the end, when it takes a dark turn, is on par with one of the bite-sized Harlequin Historicals in terms of mood, style, and atmosphere.

Phadera is the daughter of a Senator. Her mother is dead, and money runs through her father's hands like water as he gleefully spends money to keep his Seat. To secure his political position and get $$$, he has decided to marry Phaedra off to another Senator, a man old enough to be her father: Marcus.

On the day of her wedding, Phaedra's father hires two gladiators to fight for the pleasure of the crowd. One of these is Valens Secundus, Rome's Champion. Phaedra finds him attractive, especially in contrast to her husband, and the two of them end up talking briefly in the gardens about fate and position in society, and pledging to change the lot that fate handed to them for the better.

Several years pass, and neither of them has forgotten the other. Phaedra's husband is now dead and Valens has mostly retired from the Arena. However, a new man has stepped into the picture. This new man is Marcus's nephew, Acestes, who wants Phaedra for himself. And he will stop at nothing to get her, even if it means blood. It's been a while since I hated a character so much. He was awful.

THE GLADIATOR'S MISTRESS was a fun read. Phaedra is kind of a passive, spineless heroine, but she didn't quite border on TSTL, and seemed to have located her backbone in the last act (but only after it was basically handed to her - *sigh*). I really liked Valens. He is a kind hero, and strong. The secondary characters, Terenita, Baro, and Fortunada, were good too, and I see that the second book in this series is about Baro's and Fortunada's story. Acestes, as I said, was a pig. I liked the action scenes and the descriptions, and I think if you like HQ historicals, you'll enjoy this book as well.