The Queen and the Cure by Amy Harmon 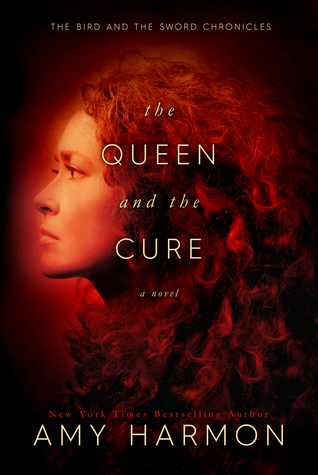 After finishing THE BIRD AND THE SWORD, I was eager to pick up the sequel, THE QUEEN AND THE CURE. Harmon is a good author - her writing is gorgeous, and even if her stories don't feature a lot of swashbuckling action or grim political coups, there is something appealing about a light fantasy that packs in some romance if it's done in capable hands. I liked the hero and heroine of the previous book, too. Lark and Tiras had the whole "star-crossed lovers" thing going on (I'm a sucker for that), and I thought Lark's magical abilities were cool. Plus, she was illiterate and she starts to fall for the hero when he teaches her how to read. YES. I couldn't wait to find out what happened next in the story, because even though the couple ended up together at the end, it was still more of an HFN because the baddie got away.

My first warning that THE QUEEN AND THE CURE wasn't going to be what I expected started at the very beginning. This book isn't about Lark and Tiras (although they have cameos). No, this book is about Tiras's bastard half-brother, Kjell, and the insipid little twit that is his love interest, Sasha - although I prefer to call her Becky, because of how basic she is. You know those spineless, teary, self-sacrificing heroines who immediately cling to the hero like saran wrap. That's Sasha, AKA Becky. To a T.

When Kjell first finds Becky, she's collapsed in the woods, with several broken limbs. She has the Gift, AKA magical powers, so her distrusting village-folk ran her into the woods and off a cliff. Because she would be stupid enough to run off a cliff. Anyway, he heals her (because his magical gift is healing), and she immediately proclaims herself to be his slave now, and that she belongs to him. This becomes a gross recurring theme in the book, her telling him that she's "his." It is also basically the foundation for their insta-love, which is super gross. That's not love. That's needy dependency.

BTW, her "gift" is that she's a Cassandra-like prophet, and most people choose to disregard her. Apparently her visions don't always come true; she can prevent them. I seeeee.

The villain in this book is Lady Firi from the last book, since the other villain died. I was sad about that, because I actually liked Firi, and her big reveal as the bad guy was upsetting. I felt betrayed. We find out that she's even eviler than we previously imagined because - oh, guess what? She's the reason that Becky with the lame powers has amnesia (oh yes, there's amnesia) and ended up a slave in the first place. Because we need a reason to hate Lady Firi, I guess, since Becky doesn't really have a horse in the fight beyond wanting to do what ever Kjell tells her to do.

Oh and guess what? GUESS WHAT?

Well, if you're sure.

Kjell... and Becky with the lame powers...

They're both fucking royalty.

Even though neither of them starts off as anyone of importance (beyond Kjell, who's the "spare" to Tiras's heir), both of them find out that they're actually the Royal Royaltons of the Land of Special. Kjell's mother was a Queen, and Sasha - I mean, Becky - is a Queen. So now they don't need to be sad about not being as special as Tiras and Lark! THEY'RE BOTH SPECIAL TOO! YAY!

Oh. My. God. I wanted to throw this book out the window when I read that. I'm a sucker for a good amnesia plot as much as anyone, but this was ridiculous. And what the hell is that power, pulling memories down from the stars? I don't remember that being one of the four main powers from the previous book. I am pretty sure that this author went ahead and created new ones to insert this fuckery into THE QUEEN AND THE CURE for her special deus ex machina and I am not happy.

I am done with this Becky nonsense. Christ, what a disappointment.