A Thousand Ships by Eric Shanower 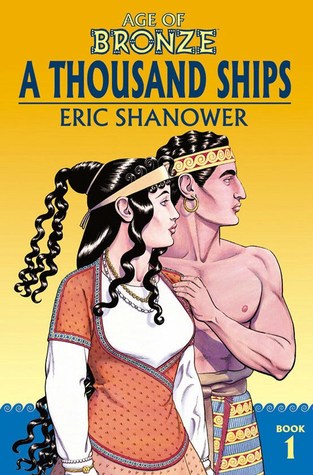 Hello, friends. Did you know that I am a sucker for Greek mythology? Because I am. When I was a kid, my mother used to read me stories from D'Aulaires' Book of Greek Myths. And as obsessed as I was with Ancient Egypt (very), there was something incredibly appealing about the Greek pantheon, and how pettishly, foolishly human they were in foible and flaw, alike. I am by no means an expert in antiquities, but I know enough that I have an internal rubric of accuracy where 1 is Disney's Hercules and 10 is something like Mary Renault or Madeline Miller, depending on how much you allow for artistic license (I do).

I got A THOUSAND SHIPS from a co-worker (perhaps you are noticing a pattern in my latest slew of books, eh?). I'm enough of a nerd that when I heard the word bronze in tandem with comic, my first thought was "The Bronze Age of Comics," which spanned from the 1970s through the 1980s, and I was envisioning a "best of" anthology of panels from artists like Stan Lee or Jack Kirkby. But no, this is about the literal bronze age in Ancient Greece: a comic-book reimagining of The Iliad.

I had to read The Iliad in school and did not like it. Granted, I was only 15 or so, so the thought of a bunch of sweaty dudes duking it out over a girl they thought was hot felt a bit too "been there, done that." Plus, the military stuff. The military stuff was boring. Later, in college, I was forced to read it again, and I also watched some of the television adaptations, Troy (2004) and Helen of Troy (2003), and those actually made me like The Iliad more, because, like Shakespeare, it wasn't intended to be read; it was told, dramatically, and so seeing it on screen brought some of the magic back, I think.

A THOUSAND SHIPS details the prologue to the famous battle of the Greeks vs. the Trojans, setting the scene, introducing us to the characters, and basically providing context for why the battle started (there were many reasons). The abduction of Helen was unarguably the catalyst, but it wasn't like the Greeks or the Trojans were biffles before that, either. I really liked the story-telling and the dialogue in this book. I thought the writers did a good job condensing the important parts, and used their medium to their advantage. Likewise, the art - the art. It was phenomenal. The characters' faces were so expressive and nuanced, and I loved that the artists actually made them look ethnic - I can't tell you how irritating it is to see illustrations of the Greeks as blonde, pasty white people. Excuse me.

I saw some reviews complaining about the removal of the gods themselves from this retelling - and yes, that is somewhat true. The gods are never illustrated and make no direct appearances in this book. However, their presence is still felt, and we encounter many of the demigods in this book, like nymphs and half-human progeny. I actually felt like this made the book feel more realistic, personally. It made this feel more mythological/religious and less fantastical to have the gods unseen.

If you're a fan of graphic novels and Greek mythology, this is a great book, honestly. Between the art and the condensed retelling of the story itself, I thought the creators did a great job. This would be a great tool for kids who are reading The Iliad and don't get it, because it provides excellent visuals for what's going on and why. I wish I'd had a copy of this floating around when I was getting quizzed on it back in the day, but hey, it was a whole lot of fun to read now, too. :)