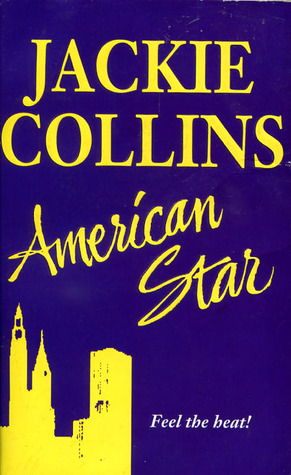 Reading CRAZY RICH ASIANS gave me a hankering for tales of rich people behaving badly, and seeing as how I'd already worked myself through CHINA RICH GIRLFRIEND, the only other book I had on had to serve my purposes was by good old Jackie Collins. RIP Ms. Collins. Nobody, and I mean nobody, writes trash like you. I don't believe in heaven, but if I did, I could totally picture Ms. Collins up there writing stories to scandalize the angels as they screwed their way across the clouds with big pie in the sky dreams, only to have success forestalled by drug addiction, sexual abuse, murder, car crashes, plane crashes, adultery, and heartbreak.

AMERICAN STAR is a lot like her other standalone, ROCK STAR, in that it follows a bunch of outcasts from youth to middle age as they hunt down fame, only to find out that success isn't all it's cracked up to be if you aren't with someone you love (re: want to bang until death do you part). Lauren is the good girl next door with a desire to break free from convention and become an actress in New York. Cyndra is a half-black girl with a long history of abuse who wants to sing and be appreciated for who she is and not what she represents to racist jerks who view her as a walking fetish. And Nick is Cyndra's half brother who wants to make something of himself and get out of the trailer park he lives in with his deadbeat father and black stepmother. All of them have dreams, all of them have secrets, all of them want revenge.

Given the publication date of this novel, it probably isn't going to come as a shock to you when I tell you that this book has trigger warnings across the board. AMERICAN STAR has a story to tell, and to hell with anyone who might be offended; it's going to tell that story however it wants. I can't help but respect such candor, but if you are sensitive to such topics as the ones I mentioned in the first paragraph, you'll probably want to give this one a miss. That said, if you enjoy doorstop epics that follow a troupe of characters over the span of their lives and put them through all kinds of hell before reluctantly dropping that HEA in the dust at their feet, then this is the book for you, my friends.

Honestly, I think this is one of the best books I've read by her so far. All of the characters were so compelling, and it had the nuance that ROCK STAR lacked. Say what you like about such trashy books and their target audiences, but I feel like books like this and VALLEY OF THE DOLLS really were quite advanced in some ways for daring to portray women as sexually autonomous beings with agendas of their own, for better or for worse. This isn't feminist literature, exactly, but it could be its second cousin twice-removed.