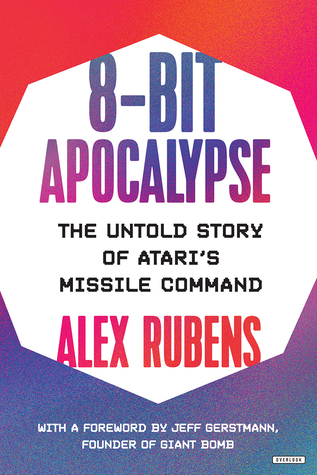 8-BIT APOCALYPSE is a difficult book to review, because there were some things it did really well and other things that it did less well. This is one of those "micro-histories" about how certain things were made or created, think the Canadian TV show, How Its Made, only less overtly focused on the technical aspects. This book in particular is about the popular Atari/arcade game, Missile Command: a game in which the player's goal is to defend cities from weaponized attacks and prevent a nuclear apocalypse.

I've read another book about video game history, which was called THE COMIC BOOK STORY OF VIDEO GAMES: THE INCREDIBLE HISTORY OF THE ELECTRONIC GAMING REVOLUTION. The title is a mouthful, which is fitting, because I think the creators bit off more than they could chew with that book. It aspired to be a comic book "oral history" of video games, but was crushed under the weight of its own ambition. The actual video games themselves did not even appear until around p. 70 or 80, as the author was focused on the previous technological advancements that made the invention of video games possible.

You could argue that this book has the opposite problem: instead of focusing on the history of Atari itself, the author has narrowed the scope of his interest to one game. Getting too specific is always a little risky because you won't always know going in if you're going to have enough meat to put on the bones of your story, and also because, depending on the subject matter, your book could end up becoming a niche topic interesting only to a very small number of people. To be honest, Missile Command game I had never even heard of before picking this book up, and I've played a lot of arcade games, from Asteroid to Frogger to Galaxian and Galaga, to Rampage and Pacman.

The author opens the book by giving context to the political environment that birthed Missile Command: the Cold War. I did think this was worth getting into, because the Cold War shaped many other popular media we still enjoy today, like Red Dawn and WarGames. A lot of people, even young people, were suddenly, painfully aware of their own mortality, and how quickly not just they could be erased from this world, but also how quickly the world itself could be destroyed in a nuclear holocaust. Apparently, the designer of the game Missile Command had more than a bit of existential angst over his creation, and some of the larger-than-life implications of its gameplay.

I did like having the context, but as with THE COMIC BOOK STORY OF VIDEO GAMES, the titular game doesn't even appear until around p. 80 or so. When it does, it's a bit tedious, because the creation of the Atari company mirrors that of many contemporary start-up tech companies, and the brogrammer culture and fast and fun work environment has lost the luster today that it probably had almost fifty years ago, when it was still a complete 180 from the typical sterile office environment.

My favorite part of the book - and this will probably surprise no one - was the drama over the high-scorers, especially that one guy who just could not handle not being the best, and decided to screw with not just the other victor, but the people who handled the world records and even the creator of the Missile Command game itself. There's a YouTuber I follow called Fredrik Knudsen who likes to do mini documentaries about weird, niche subcultures or pop phenomena (mostly on the Internet, but not exclusively so), and I was tickled because this weird war over an obscure arcade game from the 80s seemed like just the sort of thing he'd report on.

The tie-in to contemporary video games at the end was also interesting, but went on a little longer than it should have. I do agree that Missile Command (based on what I've read about it here, anyway, having not played it myself) was revolutionary in how it forced players to make optimal choices, rather than purely good ones, and punished players in an emotionally devastating way for failing to do well. The comparison to the game Spec Ops: The Line was ingenious, especially since they're both about war, and the player comes off looking and feeling pretty bad about what they have to do in both games in order to win. It's probably not surprising to you (knowing what a liberal creampuff I am) that one of my favorite paraprosdokians is: "War does not determine who is right - only who is left."

On a final note, I'm kind of surprised that the author did not bring up the game One Chance. One Chance is a game in which a scientist, thinking he has developed a cure for cancer, learns that the drug he has unleashed upon the masses will destroy all life within six days. An indie game that uses old-fashioned, vaguely Atari-looking graphics, One Chance takes the player through a grim and increasingly claustrophobic storyline that forces the player to make several moral decisions with a very high impact. It is a game that seems, in retrospect, to have been directly inspired by games like Missile Command, with unpleasant forced-choice scenarios resulting in unpleasant consequences.

Ultimately, I did like 8-BIT APOCALYPSE and I think the author had a lot of enthusiasm for his subject matter, even if it felt like he didn't always know how to go about it at times. I see that he works at Google, according to his Goodreads biography, so I'm sure his tech know-how made him a great person to write about some of the more mechanical and "insider" aspects of Atari and the game. It's not my favorite book on pop culture that I've ever read, but I enjoyed learning about arcade games and was happy that it ended on a positive note about the resurgence of arcade games in bars. (Plus, Killer Queen got a shout-out, and Killer Queen is an amazing game.)