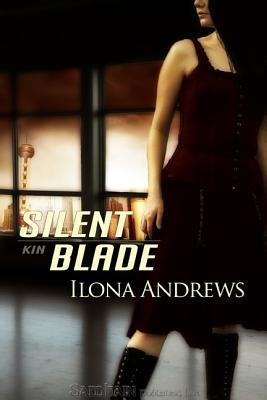 Is there anything by Ilona Andrews I won't read? Lol, JK. That was a trick question because obviously the answer is no. SILENT BLADE has been on my radar for a while now ever since someone on my friends list essentially said that it as Hidden Legacy 1.0 and trust me when I say that I would gladly pay money to revisit one of my favorite book series of all-time, even when written in a slightly inferior format. But until recently, both SILENT BLADE and SILVER SHARK were both out of print, and I could only read the reviews of my friends, who were smart enough to buy the books when they first came out, with envy. Luckily, both short stories are now back in print, and when I saw SILENT BLADE for 99-cents, I bought it immediately.

I can definitely see the comparison to Hidden Legacy, although there's elements of The Innkeeper Chronicles as well. SILENT BLADE is set on another planet, post-Earth, where humans have been genetically modified to have special abilities. The heroine of this story, Meli, has a rare gene that allows her to wield what I think is an electromagnetic whip on her wrist that can make heads literally roll, while the hero, Celino, is impossibly fast and deadly with a blade. The two of them had been arranged to be married by their families as children, but Celino broke off the engagement after he had become a one-man economic superpower, breaking Meli's teenage heart, as well.

Now impossibly strong and filled with the desire for vengeance, Meli has decided to kill Celino at her family's urging. It's easy to worm her way into his heart - when being prepped for marriage, she learned everything about him, from his favorite recipes, to his thoughts on literature, to what he prefers in a woman. With her abilities, she doesn't need a knife to kill him; and with her unassuming looks, it's all too easy to cause Celino to let down his guard.

If you know me, you know I'm a sucker for the enemies-to-lovers trope - especially when the hero and heroine hate each other so much, they actually want each other dead. I know it's messed up, but I think such loathing between H and h makes for some really smoldering UST. I felt like the world-building was very vague, which I guess is understandable in a short story, but the well-developed world of Hidden Legacy made me want more: I wanted to know why humans left Earth, why they decided to flip a giant middle finger to genetics Gattaca-style, and more about how these two things shaped the very obvious hierarchy of genetically superior families on New Earth (or whatever).

I did not get that.

I'm guessing that maybe that disappointment is what prompted the Andrews to remove SILENT BLADE from publication in the first place, especially if The Hidden Legacy and The Innkeeper series are both branched off from this story, as I suspect. I'm kind of surprised they didn't take the opportunity to flesh these books out into a full-length novel, because I think that this book has the potential to become a new fan favorite given enough love and care. As is, it's a good short story with an okay romance and an okay story, but is about as satisfying as a bite-size candy bar (need more).

If you're a fan of Ilona Andrews already, I think this would be a better read because it's fun to try and figure out how it influenced other stories (*cough*). As a standalone, it's only okay, and I probably wouldn't have been very happy with it if I'd paid more than $1. If you're new to Andrews, there are better books to start with, like BURN FOR ME or MAGIC BITES. This one is not recommended for the newbies.