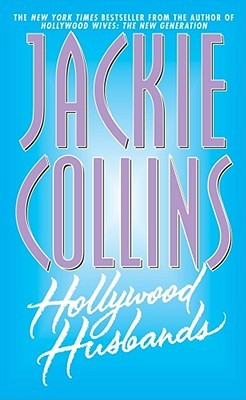 Jackie Collins is the literary equivalent of cheap tequila - you know, in principle, that you probably shouldn't do it, but it's such an easy way to have a good time. So you do it. You pick up the Jackie Collins and take a shot - in fact, you take three. Now I'm sitting here, post-Jackie, and reflecting on the garbage I just read. Did I mention that she's very hit or miss? SINNERS almost got a 2-star rating from me because it left such a bad taste in my mouth, whereas AMERICAN STAR just replaced LUCKY as my favorite of hers. Where does HOLLYWOOD HUSBANDS fit in to that ranking? That's actually a tough question...

HOLLYWOOD HUSBANDS is the story of a bunch of famous bros who basically prance around Hollywood with their dongs hanging out of their pants. There's Jack Python (lol), the sexy TV talk show host who also happens to be the brother of a famous star, Silver Anderson. Then there's Howard "I can quit the cocaine anytime I want" Soloman, who is the head of a major movie studio. And lastly, there's Mannon Cable, famous celebrity, who has a hankering for his ex-wife, and screw the current one, who can't do anything right.

This is 600+ pages of these sorry excuses for men basically living up to all of the worst stereotypes about men. The women, I'm sorry to say, aren't much better. Silver is like the quintessential self-absorbed celebrity and she's a mom, but basically only in name; she's jealous of any success her daughter has, and is resentful that having a kid makes her seem older. Clarissa is the dysfunctional TV actress who is constantly chasing after Jack Python, whereas Whitney, who is more established, is a typical primadonna. Heaven, Silver's daughter, makes all the wrong choices, and it's really hard to root for her success when she goes about it so foolishly.

Then, juxtaposed against the Hollywood sex scandals are these incredibly dark back stories, all involving rape or some kind of abuse against an unnamed female character who turns out to be one of the main characters in the storyline. I called these the Dark AF passages. It was pretty jarring, and I was surprised when I found out who the character was. I was also surprised at how disturbing these passages were. One minute, you're reading about a horribly abused character who likes to use arson to murder those who have wronged her; the next, you're at a wedding where one of the love interests breaks up the bride and groom with a helicopter and a rope, literally stealing the bride away from her wedding to an actual lord to become his mistress instead, and she absconds with him gladly. What.

I think this is my fourth or fifth Jackie Collins rodeo and I'm starting to notice some favorite themes of hers. She's a fan of sleaze-bag criminals, like pimps and drug addicts - not a fan of them, personally, I mean, but a fan of putting them into her books. She seems to have believed that all black women are named Aretha, because there was a black Aretha in this book and in AMERICAN STAR. All women of color are described as "exotic" or "exotically beautiful." In virtually each of her books, a vehicle explodes and causes deaths - in LUCKY, it was a plane. In AMERICAN STAR, it was a car. In this book, not to outdo herself, it was a luxury yacht. All of her characters are extremely promiscuous and will go to great lengths to validate their cheating.

I'm also not a huge fan of how she treats her gay characters. She did the gay character in this book some serious kinds of dirty, let me tell you. Not only does this character cheat on his boyfriend, he cheats on his boyfriend with a woman - and I'm not one of those people who thinks, "Oh, if you're gay and you're in a hetero relationship, you're not really queer!" because that is bi-erasure, but the way it was portrayed in this book, it felt to me like the character wasn't bi; it was more like, "Oh, I'm such a sexy bed partner, I have cured you of the gay!" The way all the other characters talked about this gay character was also super offensive, and of course, he dies in the end. I also side-eyed Collins when she has this character's solidly gay ex-boyfriend end up with an AIDS-positive partner who he nurses until he dies, only to start an AIDS hospice in his loving memory. That's his happy ending.

HOLLYWOOD HUSBANDS was definitely not my favorite Jackie Collins book, although it wasn't quite as unpleasant or grating as SINNERS. I enjoyed reading it but it made me feel guiltier than I would have liked, so I'm docking half a star rating. This is a positive rating + review, but I'm frowning a little as I write it, so take that into consideration.