The Markonos Bride by Min Kyuka 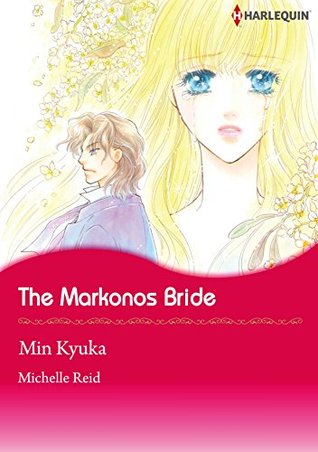 Once I bought a book at a used bookstore. It was cloth-bound, old. Henry James. Anyway, I was enjoying the book quite a bit and had gotten about halfway through the novel when I opened it up and a laminated four-leaf clover fell out. I'm not a superstitious person, except when I am, so I kept the book and the clover, because the only thing better than a cheap book is a cheap book with a surprise present inside. A similar thing happened to me when I bought a Harlequin manga book on impulse because it was 99-cents, only to find out that it was actually three books bundled in one. It was not advertised to me as such, so that was a pleasant surprise. I binged them all.

All three of these bundled Harlequin manga are by author Michelle Reid. They are each adapted by different mangaka, so the styles vary quite a bit. Makoto Onishi's MARCHESE'S FORGOTTEN BRIDE actually ended up being the best adaptation even though the art style initially put me off. It's older looking, like manga from the late 80s/early 90s, but the facial expressions were very expressive and it grew on me.

Misuzu Sasaki's NO WAY TO BEGIN had very jagged, simplistic art with very, very large eyes. It kind of reminded me of the Tokyo Mew Mew illustration style, only more simplistic. You know, one of those magical girl knock-off novels that are targeted at middle school girls. The cover makes it look like the art is going to be much better than it actually is, and the story adaptation isn't much better. This was the most disappointing book in the collection and I was not a fan at all.

Min Kyuka's art is the best of the three. It's highly stylized shoujo and very flowery-looking. It kind of reminds me of CLAMP manga, specifically Chobits with the way the long, flowing hair was emphasized on the heroine. The story itself? Meh. Louisa comes to the Greek island her husband banned her from to visit her son's grave. They are on the verge of divorce, although once Andreas enters the scene, it's clear that he still has feelings for her, although they're mired in butt-hurt.

The death of their son ended their relationship, accelerated by the fact that Louisa then caught him in the arms of another women and Andreas then proceeded to ignore all of her letters and phone calls. I guess you could call this a second-chance romance. It was kind of annoying because it turns out all of their relationship drama is based on a series of misunderstandings, which make me roll my eyes in the best of circumstances, but I just couldn't be bothered with this story.

Love the art, but the story was pretty dull.