Lost to the Desert Warrior by Jinko Soma 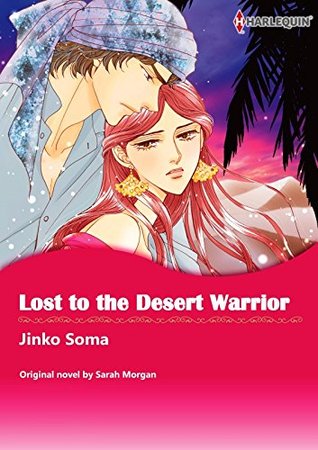 Hi, I'm a trash-hole. I read lot of trash and I'm not sorry about it. Especially cheap trash. Did I mention that this book was only 49-cents in the Kindle store? How can I say no to that? I can't. Because I have no self-control.

Harlequin manga are re-releases of Harlequin Presents novels that have been (further) condensed in comic book format. Originally, they were a Japanese-exclusive item, but word appears to have traveled, and where word went, so followed the books. They've become popular enough here out West that there's actually quite a lot of them in circulation now, and as soon as they go on sale I snap them up like MUAs stalking the latest releases of Kylie Jenner lip kits.

LOST TO THE DESERT WARRIOR is not a genre I would normally read, even in manga format. I am not a fan of sheikh romances, particularly sheikh romances that take place in made-up countries with white-washed characters. I've had this conversation before across several of my reviews, but my basic feeling is that it does an injustice to the richness of Middle Eastern culture. It says, "I don't want to bother researching you, I just want to appropriate the things about your culture I find exotic." It's fetishistic, a modern throwback to 19th century Orientalism. We want your carpets, but not you.

I know, I know, that's reading a lot into something that's supposed to be "fiction" (insert eye-roll here, because "fiction" is not carte blanche for "write whatever the fuck you feel like without fear of moral repercussions," despite what stans everywhere might think), but how else am I supposed to feel when I read about a Bedouin-like people in a made-up country where all of the main characters look very white, and only the villains look ethnic? You see something similar in Aladdin, where the main characters are fair and more conventionally Western looking, whereas the scary characters and the villains (like Jafar and the guards) have exaggerated stereotypically ethnic Middle Eastern features.

The plot of this book is pretty blah as well. The heroine, Layla, is on the run from an evil man named Hassan who wants to marry her in order to steal her father's kingdom. She flees into the arms of a sheikh named Raz, who, while an enemy of her father, appears to have won the people's hearts and is surely a better man than Hassan. They have a marriage of convenience while Raz agrees to help her find her sister (also on the run) while also trying to deal with the power coups of Hassan.

Normally I'm a sucker for marriages of conveniences but Layla is such an irritating character. Her sole conflict is "oh no, I've fallen for my husband of convenience!" and "boo-hoo, he says I'm not the real mother of the child of his dead wife!" I like heroines who are strong and compelling, heroines with depth and hobbies, who have me invested in my well-being because I see them, if not as a reflection of myself, a woman who possesses agency and wants to fulfill her hopes and dreams. It's hard to relate to a heroine with nothing but family and sex on the mind. Bleh and a half.

Still, it's only 49-cents right now, so if you want to admire some nice artwork (and ignore the rather cringeworthy cultural appropriation and white-washing), it's not a terrible deal.