The Disobedient Bride by Ryo Atsumi 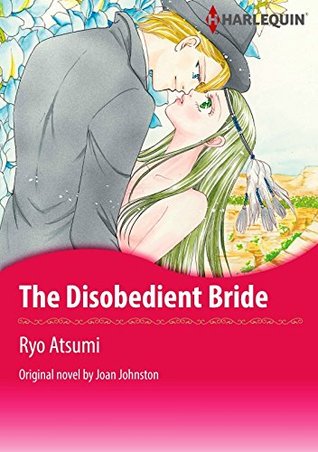 There's a lot going on with that cover. The hero has an epic case of "rape face" (seriously, what is that expression? what is that body language? WHAT IS GOING ON, MANGA COVER?) and the heroine looks like she tumbled through Coachella and landed headfirst into some cultural appropriation. I couldn't resist the grim allure of this Harlequin manga; I had to buy it.

Rebecca has been in love with Zach since she was a kid. When she finds out he's looking for a wife to bear heirs for his ranch, she immediately signs up for the job. Reluctantly, Zach agrees, although he warns her that if she doesn't get pregnant after a year, he's going to divorce her to be with someone who can. What a charmer, I can totally see why she's into this guy.

Rebecca is a nurse who works with terminally ill children, and part of her stipulation in this ~romantic~ wedding contract is that Zach allows her to have a summer camp on his ranch for sick kids. Zach lasts all of one day before he decides he can't be around them (too much of a bummer), much to Rebecca's annoyance and disgust. She also brings home a girl named Jewel, who lost her family in a fatal car accident. They are only supposed to keep her until she gets adopted, but Jewel's potential adoptive family are huge jerks who don't want a kid with facial scarring and a limp. Wow, great parenting.

As it turns out, the heroine might actually be Native? Seems like maybe they just whitewashed the heck out of her on the cover by giving her fair hair and green eyes. Apart from that dubious portrayal of her cultural origins, the heroine was OK. It's hard to hate anyone who wants to take care of sick kids and who wants to help them feel normal and accepted in the face of tragedy. Zach, on the other hand, was kind of a douche. His whole "how can dying kids have fun?" "I don't want kids around unless they're mine by blood" "women are only good for breeding because I was a nice guy who was cruelly betrayed after deigning to be emotionally intimate" mindset was really gross.

The ending was also kind of sucky. I don't understand why Rebecca had to be punished in order to teach Zach a lesson about what a selfish cad he was. Seems like women are often the vehicles that men drive around to explore the landscape of their own morality, which is a shame. Still, I kind of enjoyed the book in spite of myself and the art was good, so I can afford to be a little generous.