The Prince's Mistress by Yu Kohaku 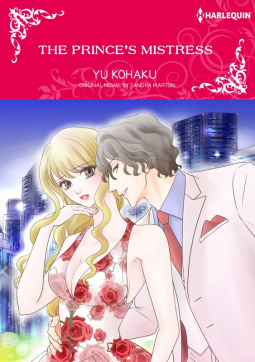 Okay, this is a pet peeve of mine, and I don't know if anyone else feels this way, but I don't like it when authors write contemporary books set in the Mediterranean or the Middle East, but then make up countries instead of writing about real ones. It kind of feels like a lazy excuse to avoid doing research on complex political relations and rich cultures, as well as white-wash characters who might otherwise be too "ethnic." It happens all the time in romance novels, and I really don't like it.

Getting off my soapbox, THE PRINCE'S MISTRESS is about the white and apparently blonde daughter of a sheikh (eye roll) from a made-up country called "Calista." She has been saving herself for marriage this whole time, but only wants to marry for love. As a result, she's busy working as a model trying to make ends meet rather than marrying a rich guy to pay off her father's exorbitant gambling debts. #RichBitchProblems

While trying to sell tickets for a charity, she meets Nicolas, the white and apparently fair crown prince of a made-up country called "Aristo." (As in "Aristocrat"? Oh my God, how lazy.) Both of these islands are right next to each other and part of a kingdom called "Karas." Anyway, she doesn't know he's a prince; as far as she knows, he's a wealthy businessman who can afford to throw away $5 million to leverage on taking her out to dinner, which she agrees to very reluctantly at the behest of her employer. I was bracing myself for the inevitable rapiness that would follow because throw an Italian/Greek/Middle Eastern hero into a romance novel and for some reason they're all super controlling and rapey, but he was actually really nice and she has a good time.

They end up falling for each other, but are both silently angsting over how it "can't last": he, because he's a prince who must marry a princess of royal blood; and she, because she feels unworthy and worries about who she's going to marry and whether he loves her more than just as a plaything. Anyway, misunderstandings abound and the heroine skulks away in tragic righteousness while the hero broods about spurning her for the sake of his own damn pride. Later, he learns that he was thinking with the wrong brain and made a huge mistake, so it's time for the "I'm sorry you let me think that you were a money grubbing like-all-other-women" not-apology that dudes in these types of romance novels (or manga) are so fond of making, and she eats it up like it's brie and caviar.

Look, this story is silly AF. I'm pretty sure it's based off one of those Harlequin Presents novels, you know the ones with the white covers and the circle with the 90s-looking cover embracing in the center of it and the titles that basically summarize the plot? I did like the art though (especially of the food), and it wasn't as offensive as it could be. I'm rather annoyed with the Big Misunderstanding climax and the two made-up countries serving en loco research, but whatevskis. It was harmless.