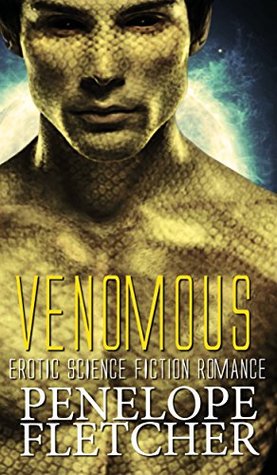 Do you have a favorite author whose works are so niche that there's no one else who really writes like them? I have two: Heather Crews and R. Lee Smith. One supplies my dark vampire romance fix, the other my alien/interspecies romance fix. It's like they deep-dived into my mind and found the sorts of stories I'd comb through Fanfiction websites as a teen for, and then wrote them. "This is my original character"-type stuff, only actually original and bad-ass AF.

Science-fiction/futuristic romance is an especially niche genre because you have to be 1) a big ol' nerd and 2) you have to be a big ol' nerd who likes romance. Those two things shouldn't be mutually exclusive, but science-fiction hasn't traditionally been a safe space for women, what with all the dudes trying to keep us out of their Questionably Phallic Spaceship Appreciation Society for Big Boys Only™ club through the usual dudebro tactics of Passive-Aggressive "Are You a Fake Geek Girl?" Trivia Questions™ and Women Are Not the Target Audience Because My Penis Told Me So in a Dream - or Was It an Alternate Reality Brought on by a Singularity? Either Way no Non-Sexualized, Agency-Possessing Representation for You™ "logic." Basically, it's a niche genre for a niche audience that is only now starting to really grow.

R. Lee Smith is one of my favorite authors, and I'm super bummed that she appears to be on hiatus right now. Nobody writes like her. If you had told me ten years ago that I would think lizard men or zombie men or insect men could be hot, I would give you the side-eye before backing away slowly to the other side of the street. Her stories are just so full of emotional development. They are entire worlds, packed in book form, cinematic in scope and epic in the way that books rarely are anymore. She basically writes GONE WITH THE WIND, only with lizards instead of carpet-baggers. Go fig.

So anyway, with R. Lee on hiatus, I needed a replacement fix. Penelope Fletcher's book, VENOMOUS, shows up on a lot of the same lists as Smith's work, and if you search for Smith's work on Amazon, VENOMOUS shows up as a suggestion there, as well. Targeted marketing, indeed. I was super curious about the book because the premise seems really great. The heroine, Lumen, is auctioned off as a prize to a bunch of aliens fighting in a gladiatorial arena. The one who wins her ends up becoming her lover, and then he takes her back to his home world where, I assume, racism and sexism rear their ugly heads in a Cosmically Star-Crossed Battle of Fiery, Interspecies Love™.

Or so I would imagine.

The problem was that a lot of my friends had given this book very low ratings on Goodreads. I trust my friends (or I try to - except when they lead me astray. *cough* Disappointments *cough*). But here, their concerns actually seemed pretty legit and I couldn't bring myself to pay for VENOMOUS. But the author, perhaps sensing my weakness, said, "That's okay, boo, it's free now. Enjoy." And of course, being a trash queen with zero self control, there was no way I was saying no to a free-ninety-nine price tag - especially not when it was a book I was actually really interested in. I "bought" it.

First, let's just say that all the complaints about this book are true. It reads like one of those late-80s bodice-rippers. Like early-80s bodice-rippers, late-80s bodice rippers had rape (or, "dubious consent" if you're living in Delusionland™) . Late-80s bodice-rippers, though, felt a teensy bit guilty. Not guilty enough to remove the rape, but guilty enough for a rebrand. So, like a third-tier celebrity who's erroneously spilled the tea and then deletes all their Tweets and Instas like they think the Internet has no collective memory and won't remember all those ugly brown stains (spoiler: we do), late-80s bodice-rippers decided to rebrand the way they presented sex, where the no-no-nos became no-no-yeses, and the heroine's traitorous body made her realize that she could trade consent for true love, like exchanging a return item at the mall. VENOMOUS takes this approach, with some very dubious consent actually becoming very pleasurable for the heroine once she decides that she didn't really have a choice anyway, and at least he's sort of hot in a four-armed iguanodon sort of way.

I have no problem with dubious consent, but I didn't like the way it was presented in this book. I feel like characters should react to situations with some degree of realism or else your characters just kind of feel like a bunch of cartoony finger-puppets on a cardboard stage. It doesn't help that the writing in this book is exceptionally awful. It reads like the author had a thesaurus on stand-by and was trying to write the Great American Novel, if the Great American Novel had sex scenes where orgasms were called "harmonies" and penises were referred to as "stems." Some of these words were being used incorrectly or could have been substituted for better words. The writing is also very clunky. She has a habit of starting her sentences with a verb or a noun, so you'll get things like, "Proudly he lifted his viridian grated chest ribbed with proud scales and laid his orbs upon his mate." That's my own sentence, FYI, not hers, but it's a pretty close approximation of her style, imho. It's really weird.

I'm giving up on this book because it's not for me and I don't really have much of a stake in finishing it. If you're interested in the book right now, it is still free for Kindle, so I recommend grabbing it now while it has that free-ninety-nine price tag and maybe seeing if her style works for you. Just keep in mind that the reviews are right, she is no R. Lee Smith - she's more like early Johanna Lindsey.