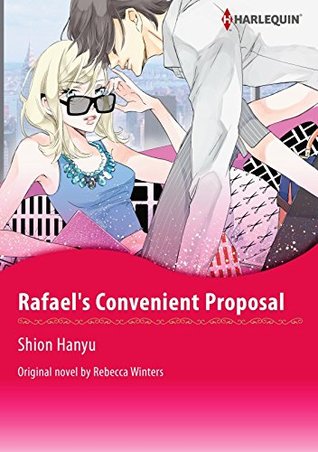 When I pick up a problematic romance novel, I have two reactions. Romance reader me is like, "Yaaass, gurl, you get some. Bees! Birds! Flowers! Hearts! Yaaass!" And feminist me is like, "Um, actually, relationships should not be passports to sex. Women should be autonomous human beings with goals that exist outside of a relationship - and oh, by the way, you don't need to be in a monogamous relationship that leads to marriage in order to have sex, thank you very much."

RAFAEL'S CONVENIENT PROPOSAL is an adaptation of a novel originally written by Rebecca Winters. It's about a woman named Mallory who is the vice president of a huge cosmetics company called "Lady Windemere" (think Maybelline) that's aimed at single career women who don't need men to buy makeup and enjoy themselves, just like the creator. After being humiliated on a talk show by a sexist pig who hurrs and durrs his way through a gamut of stereotypes, Mallory goes to Lisbon to surf, where she saves the life of a girl who just so happens to be the daughter of the resident nobility, Rafael D'Afonso.

I rate these Harlequin romance manga based on several categories - the art, the text to panel ratio, the story line, and how well I feel said story line translates into manga format. The art in this book is absolutely gorgeous - Shion Hanyu is very talented, and I really enjoyed her gorgeous clean lines. The text-to-panel ratio is good and it feels like a clean adaptation. My problem is with the story. Mallory, as I said, saves D'Afonso's daughter, Apolonia, from drowning. She feels a connection with the girl and wants to help take care of her like a pro bono babysitter because the girl's father is a friend of her fellow employee and friend, Lionor. But she's also very attracted to Rafael.

The problem is that Rafael claims he can't allow her to do this because having a single woman hanging around taking care of his daughter reflects badly on the family's honor. If she wants to stick around, he claims, she has to marry him. Bizarrely, she agrees, but towards the end of the novel she has a "what am I doing?" moment where she realizes that this stunt has jeopardized her career. She leaves, but of course the girl chases after her car and falls while the contrivedly adorable pet puppy licks her wounds (looking sadder than any puppy conceivably ought to). The sounds of the little girl's sobs ring in her ears as she remembers Rafael telling her coldly that she only thinks of herself.

OK, let's unpack this. This father figure of the year cares so much about his little girl that he allows her to roam beaches unattended where she might drown so that a deus ex machina in the form of love interest might luckily happen upon her and save her from otherwise certain death? Oh, but she's the selfish one who only thinks of herself? What makes this worse is that this feels like a total bait and switch after we have a "you go girl" moment watching Mallory tell sexist TV host that women wear makeup for themselves, and not for men, tysvm, and you can be single and career driven and proud.

The "happy" ending (which the book actually has to tell us at the very end is a "happy ending" in fancy letters at the bottom, because I guess it's unclear) is that Mallory realizes how "selfish" she is wanting a career when this rich dude is willing to marry her in exchange for her babysitting, and she's like, "I'm ready to think of others!" Um, gag. As a career woman myself, I can't help but take offense to this. Having a job is not selfish. Honestly, I'm one of those people who needs fulfillment in my life to feel good about myself and being some trophy wife cum babysitter sounds like a waking nightmare. How dare this novel say that women who want career development are selfish.

Initially I was thinking I was going to give this a four-star rating but this ending left such a sour taste in my mouth that I can't bring myself to do it. I loved the story until it took that manipulative, antifeminist turn for the worse, which is a damn shame because the sexual chemistry and the art were both pretty great up until that point. Still, it's only 49-cents atm, which is a pretty great deal.